Ask painter Roscoe Hall how he chooses his subjects, and his answer is as likely to include deep references to punk, hip hop, and pop culture as it is to share reverent, intimate personal stories about whoever he’s connecting with on the canvas. And while today it seems common to refer to someone as a polymath, which Hall definitely is, I prefer to think of him as a polyglot – as someone who uses multiple languages to explore and connect with audiences across unfamiliar — though shared — spaces.

Hall’s works are conceptually and visually arresting. He combines familiar histories with unfamiliar faces, names, and realities to construct nuanced narratives of Black experiences, identities, and descriptions that are as much definitions as they are depictions. He combines punk rock’s energy with rap’s complexity to create paintings that speak, and sing — though maybe not always the most familiar, or most forgiving, tunes.

Part of what makes Hall’s paintings so mesmerizing is how he conveys the bastardized and the banal — works about the Scottsboro Boys, for example. But here, they’re far more than “The Alabama 9.” We see Norris, and Weems, and can almost hear Chuck D say, “Freedom/to get out/to the ghetto/no sell-out,” as if in this fragmentary moment there was some miniscule possibility that any of the Scottsboro Boys ever had a chance. What Hall does so subtly, and so successfully, is demand that viewers ask themselves not what it is that they see, but what they imagine they perceive when they see Roy Wright (One of the Alabama 9/Scottsboro Boys) standing almost life-size in his jailhouse blues.

This creative exploration of Black male sartorialism — prison denims, canvas, scrubs, and plain white tees, Air Jordans, the immediacy and elegance of Botham Jean in jacket and tie — deeply and directly demands that we question our preconceptions of history and identity. Add in the fact that Hall tells us what it takes for him to even begin to create these works — beers, cookies, gummies, sativa, Mos Def, Robert Glasper, love, and more — and you begin to see how he synthesizes history, memory, materiality, and emotion onto his oversized supports using everyday materials.

Hall’s understandings and depictions of space are also unsurpassed. The recurring black lines — bold, impenetrable, immediate — become physical and visual stops that separate us from his subjects even more. What seems like a moment of tenderness in Nod to Renaissance becomes a block. You can almost feel the cold steel, but you know the separation even more. The presence in detachment. That’s the same feeling in several of the Scottsboro Boys works, which is similar — though you’re being reeled in more closely — in 31 Flavors. By the time you’ve crossed over, crossed in, and maybe crossed on, you’re inside. In Arm’s Too Short to Box with God, for example. And in 2 of the Alabama 9/Scottsboro Crew, or Uncle Bobby, you simply have no idea where you are.

If connection and emotion are central to impactful works, Hall switches position, perspective, and point-of-view far better than most. His works are about the impacts of anger rather than angry; about the impacts of perception rather than perspective; about understanding and empathy rather than misunderstanding and apathy. Sure, at times he diffuses meaning into a flat plane, like in Brixton 1976, but you can just as clearly hear The Clash’s Guns of Brixton and imagine the Brixton Riots as you can wonder how this bastion of South London Black culture got gentrified and transmogrified into just another London suburb. And yes, that is Roots Manuva telling you, “On the south of the river is where I reside/making movements discrete cause I know I’m being spied.” Hall’s just as aware of this, but he’s right here, inviting connection in every work. It’s not so much that he’s telling as he is looking for your “tell,” that moment, that instant, when he knows that his works have landed, gotten under your skin, made you stop and stare. And just what are you staring at? “Everyday shit,” as he puts it, transformed into something special: coffee grounds as a painterly ground; spliffs, Sade, and salt’n’pepper shrimp; crap tv, kombucha, and a Subhumans soundtrack. Roscoe Hall’s ready to share a story. It may not be easy for either of you, but if you feel like you’re ready, take the steps. Giant. Steps. 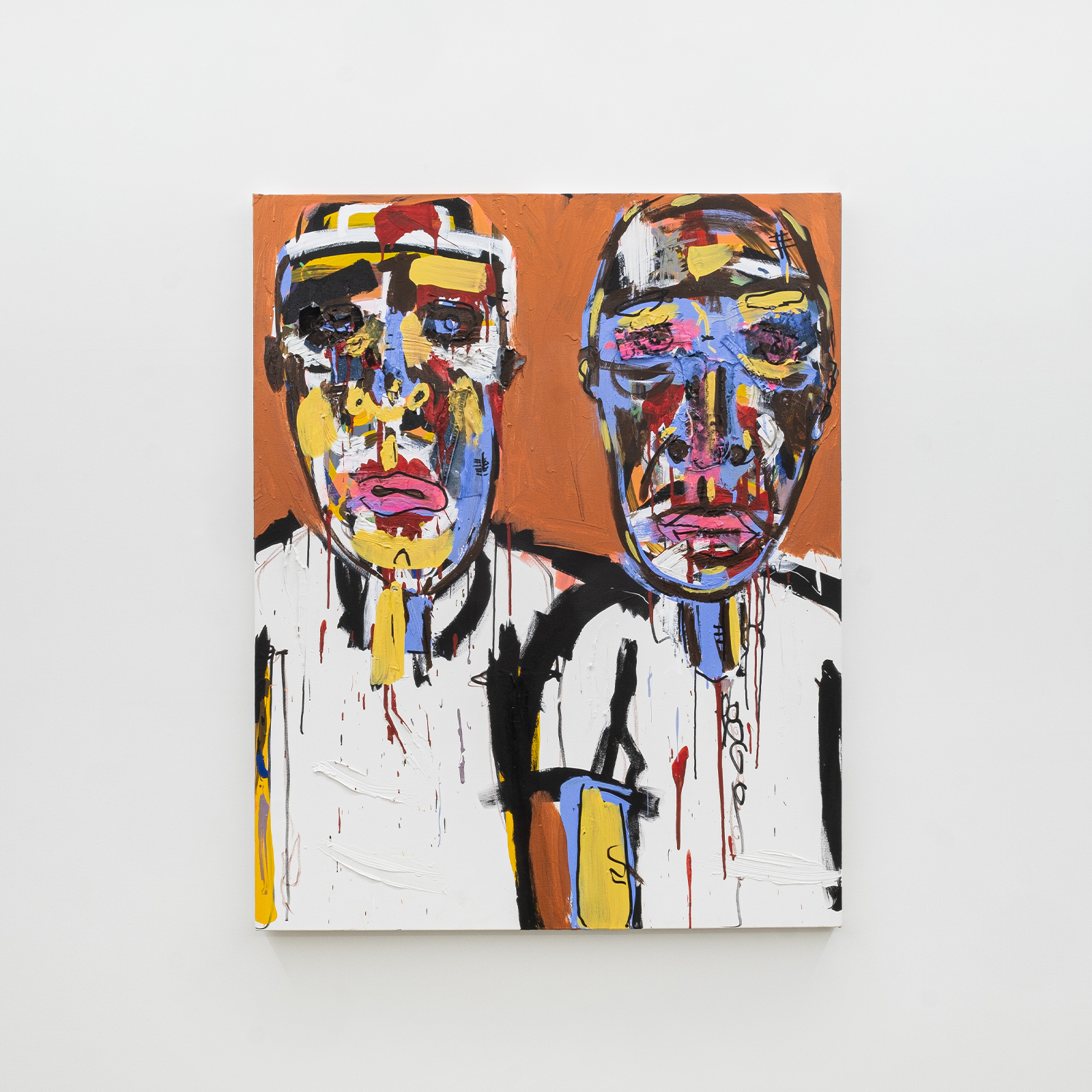 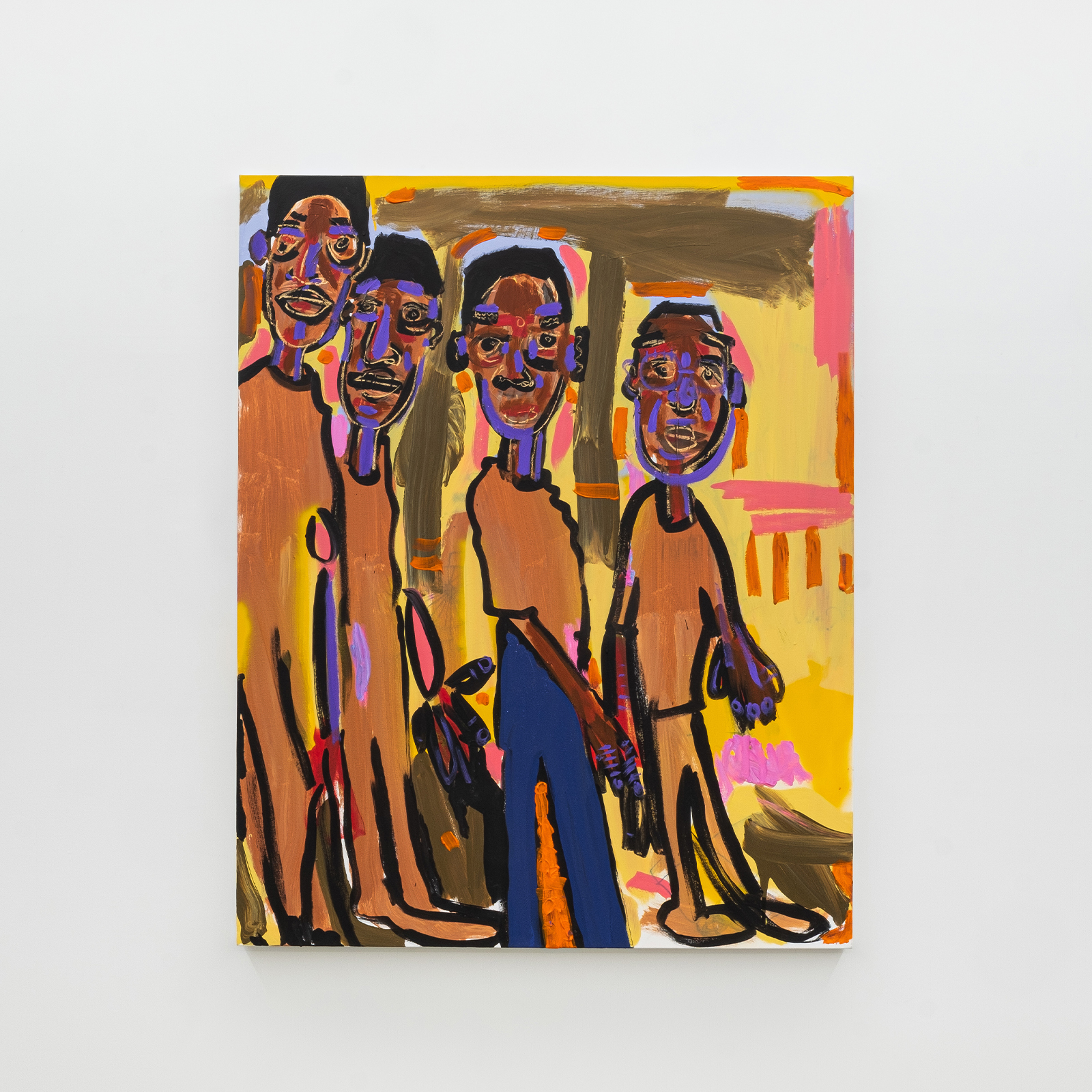 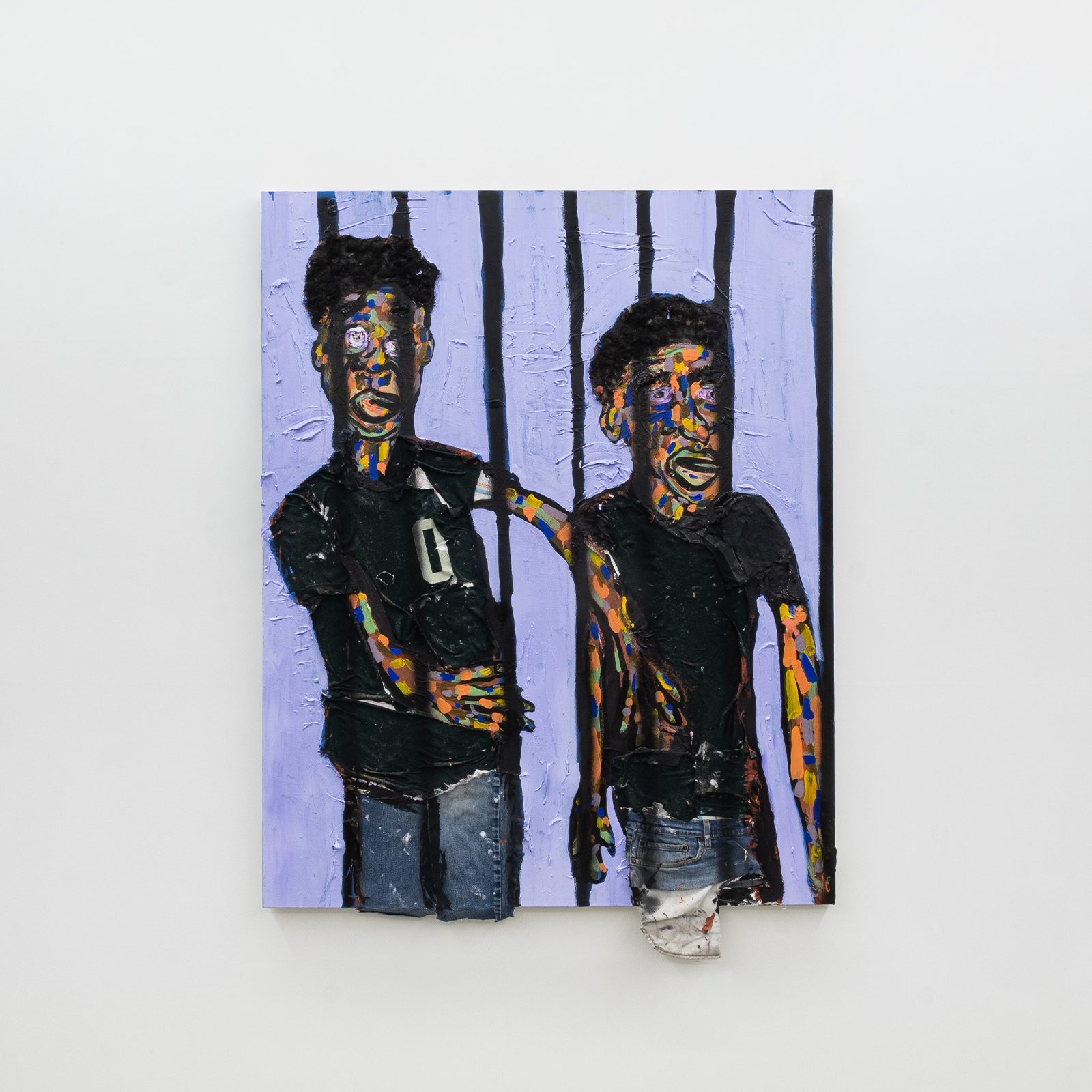 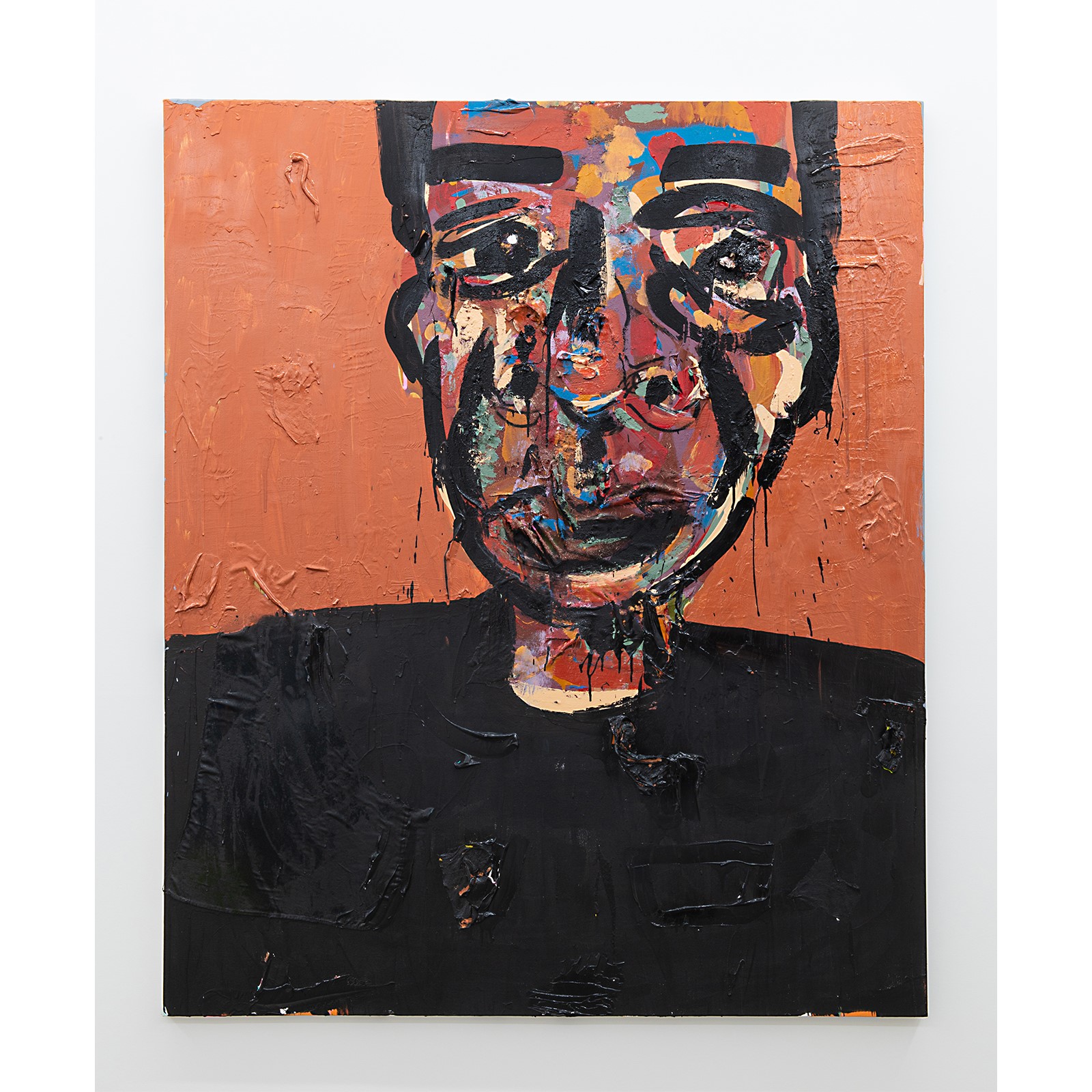 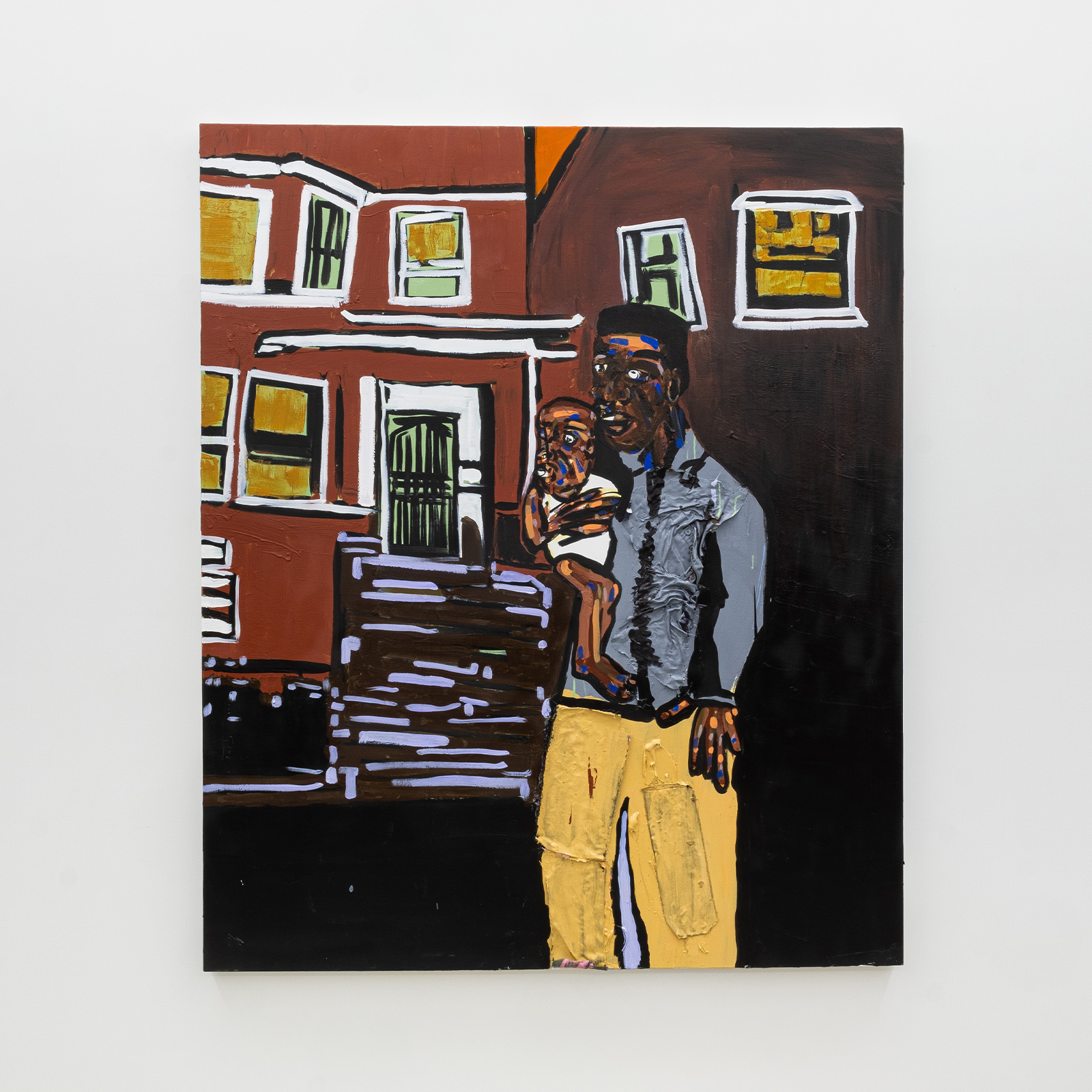 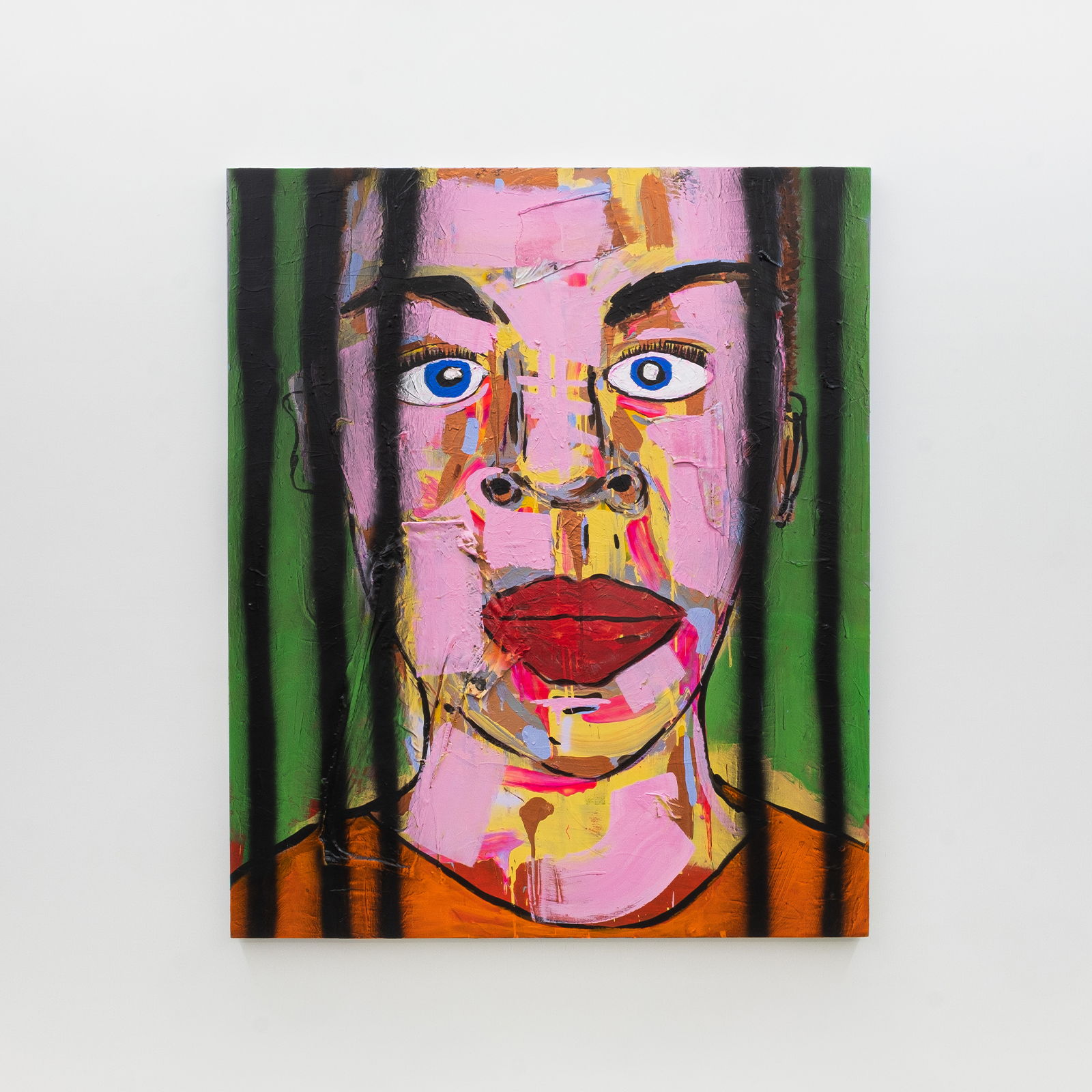 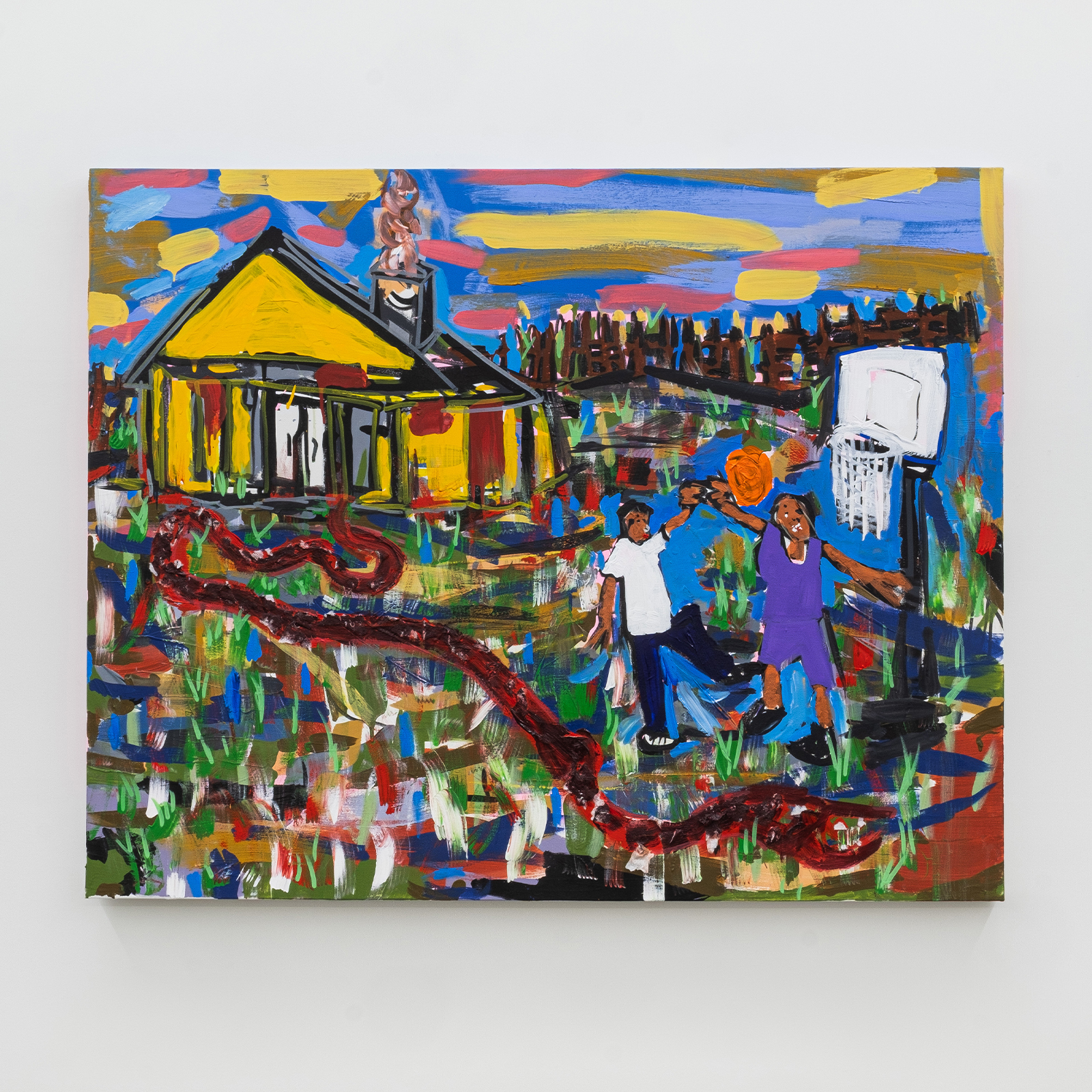 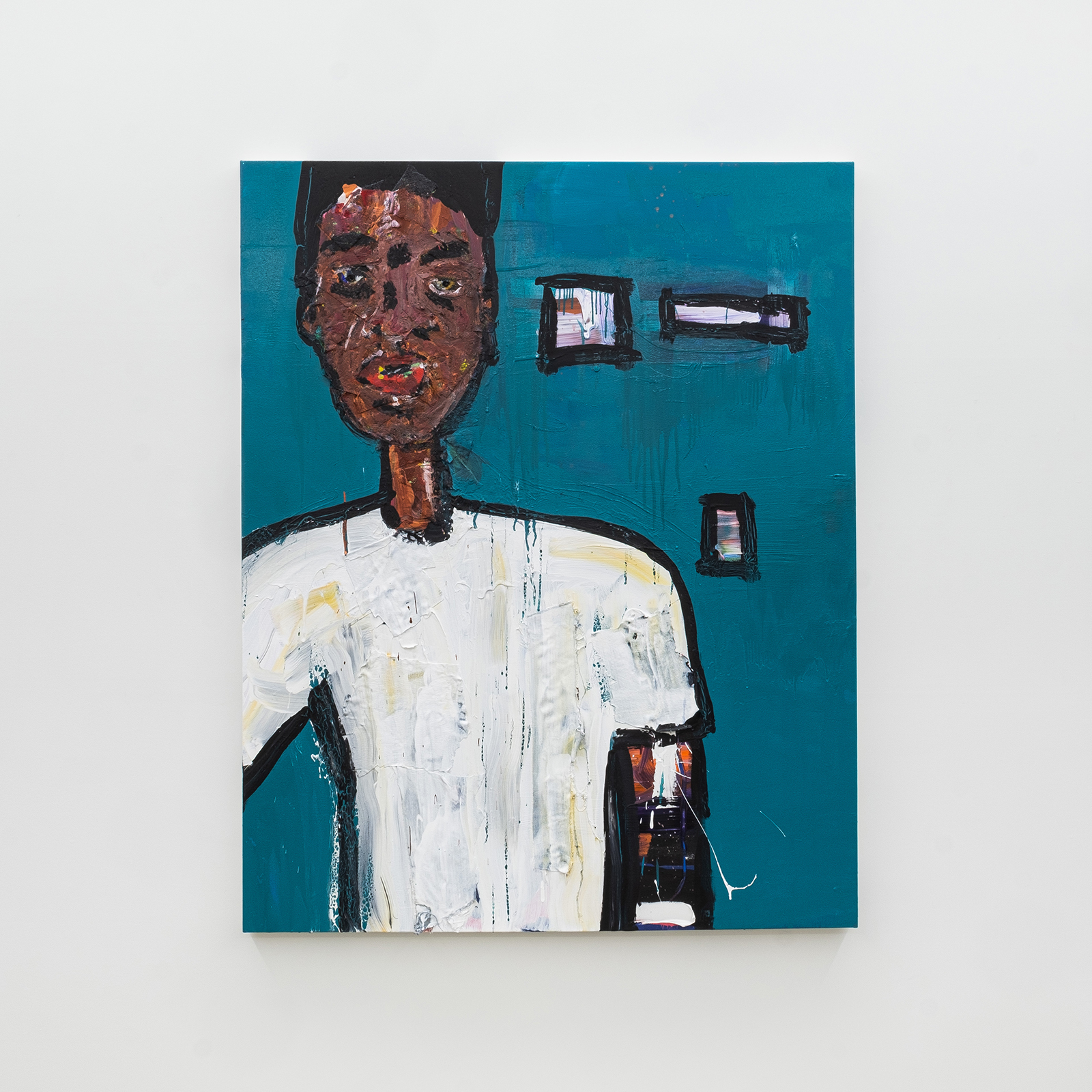 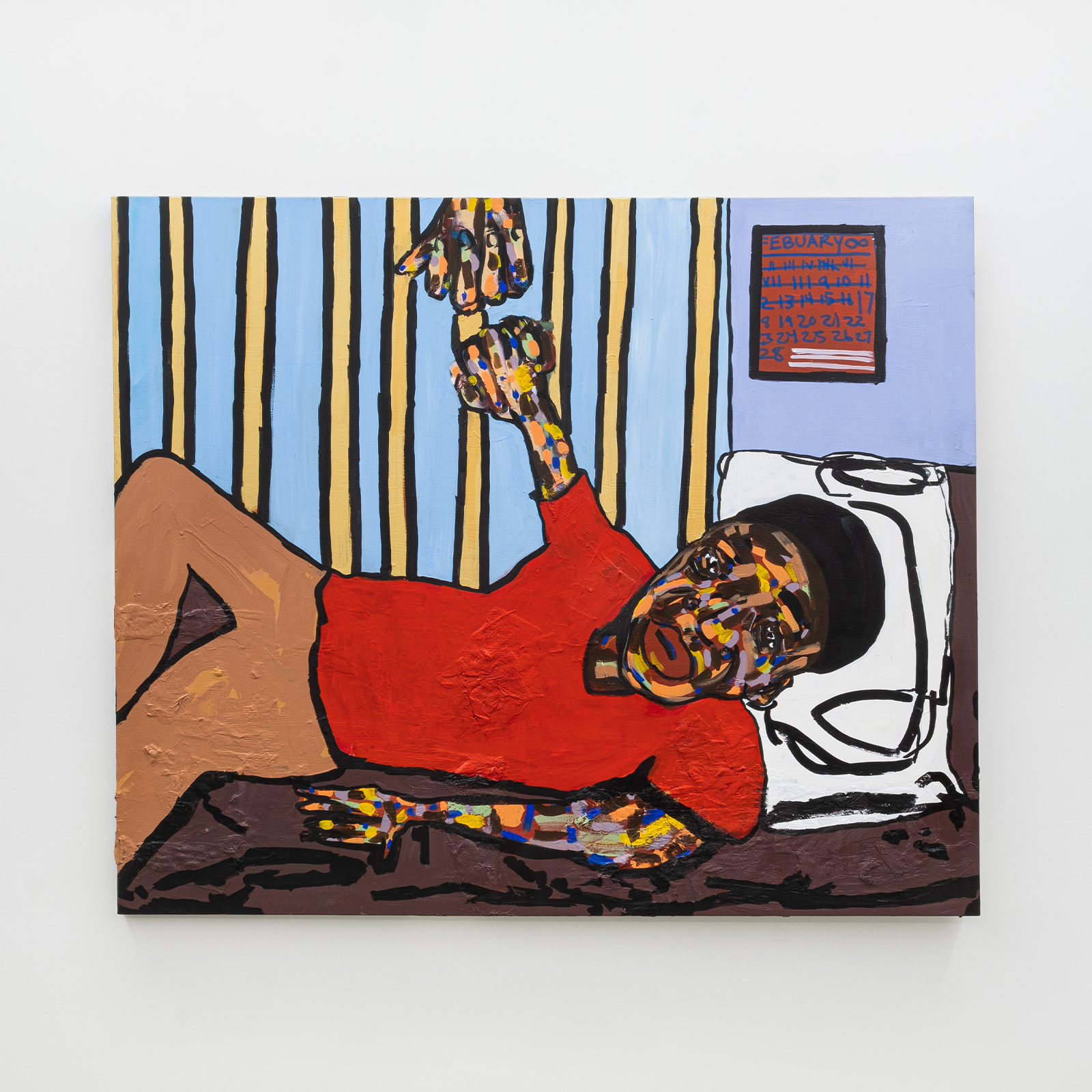 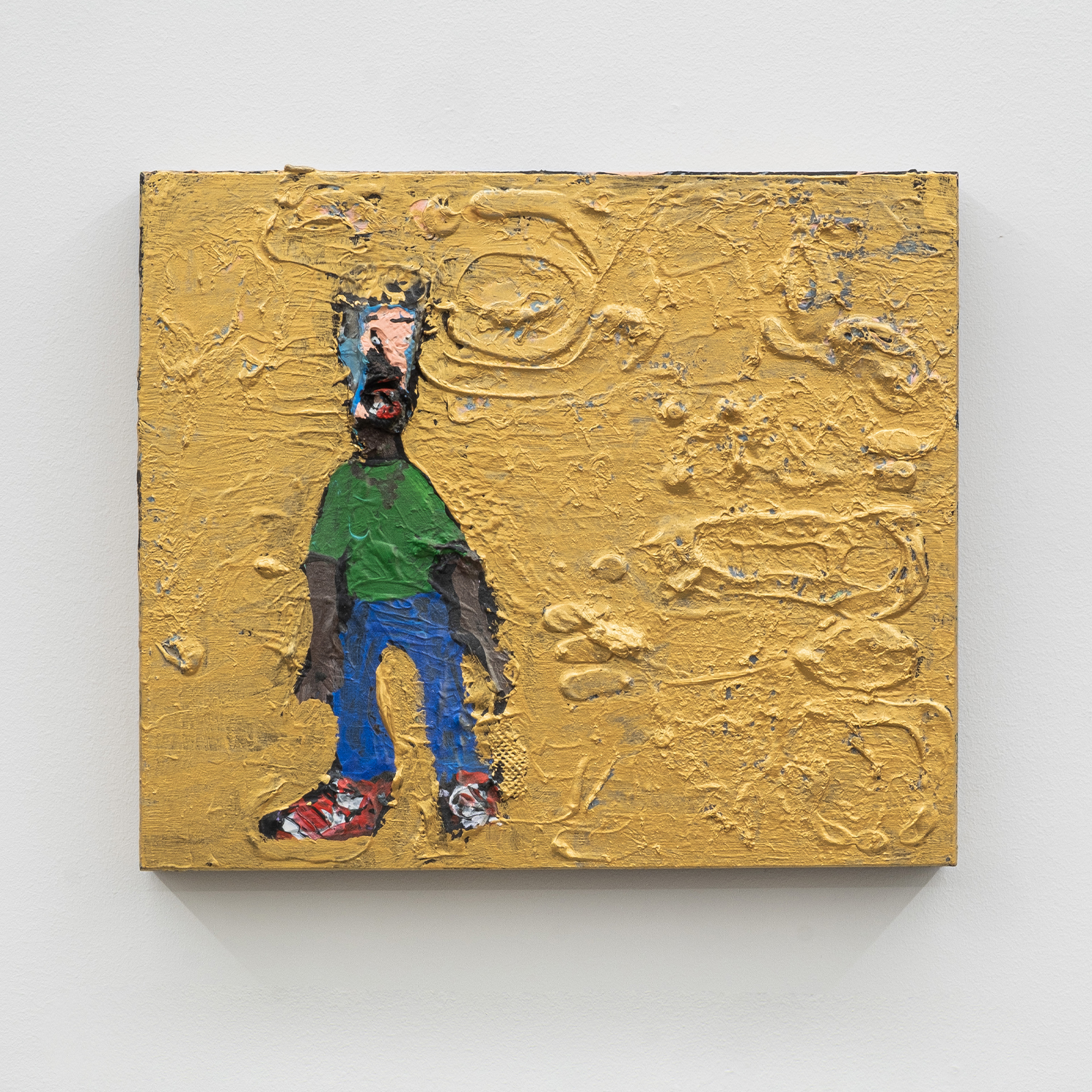 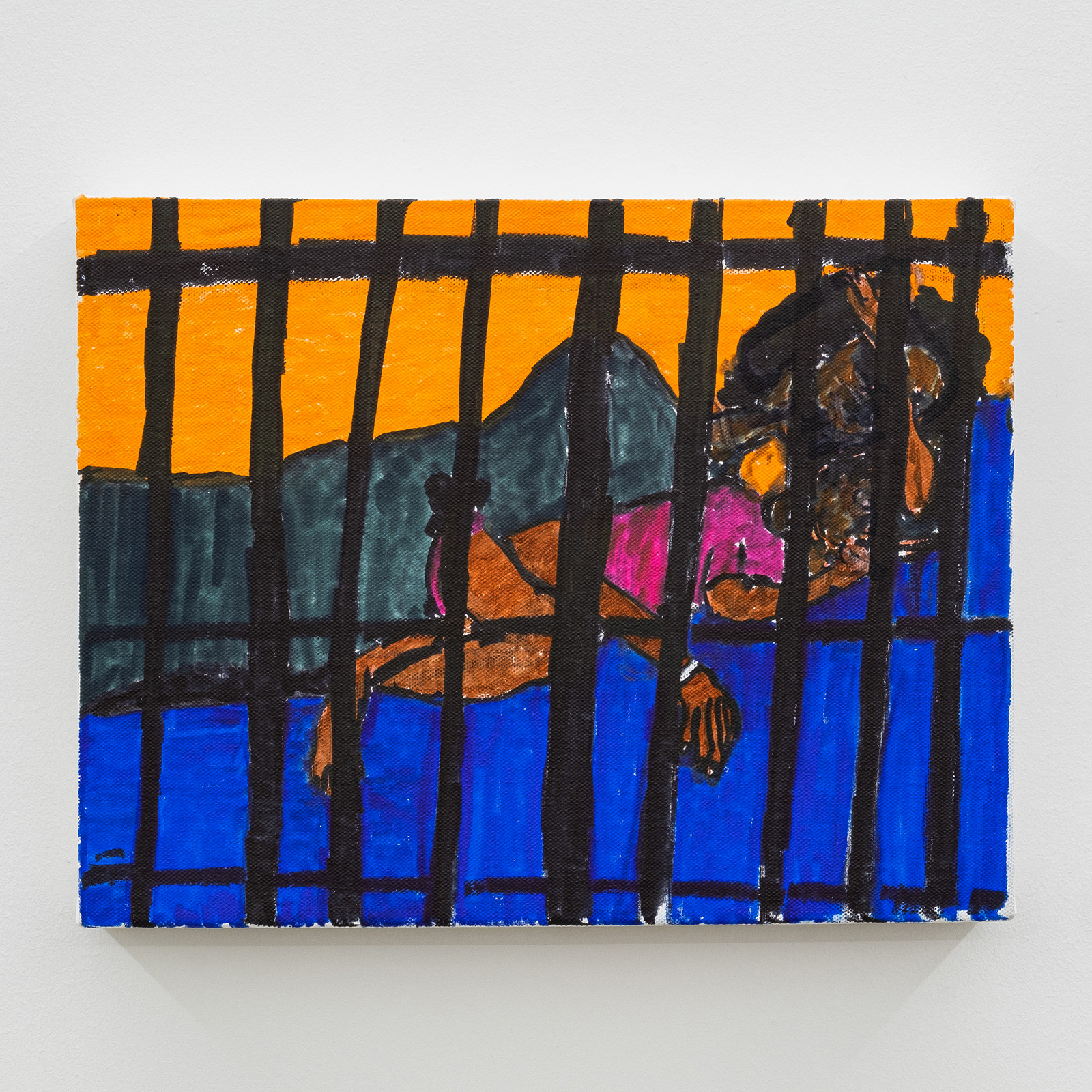 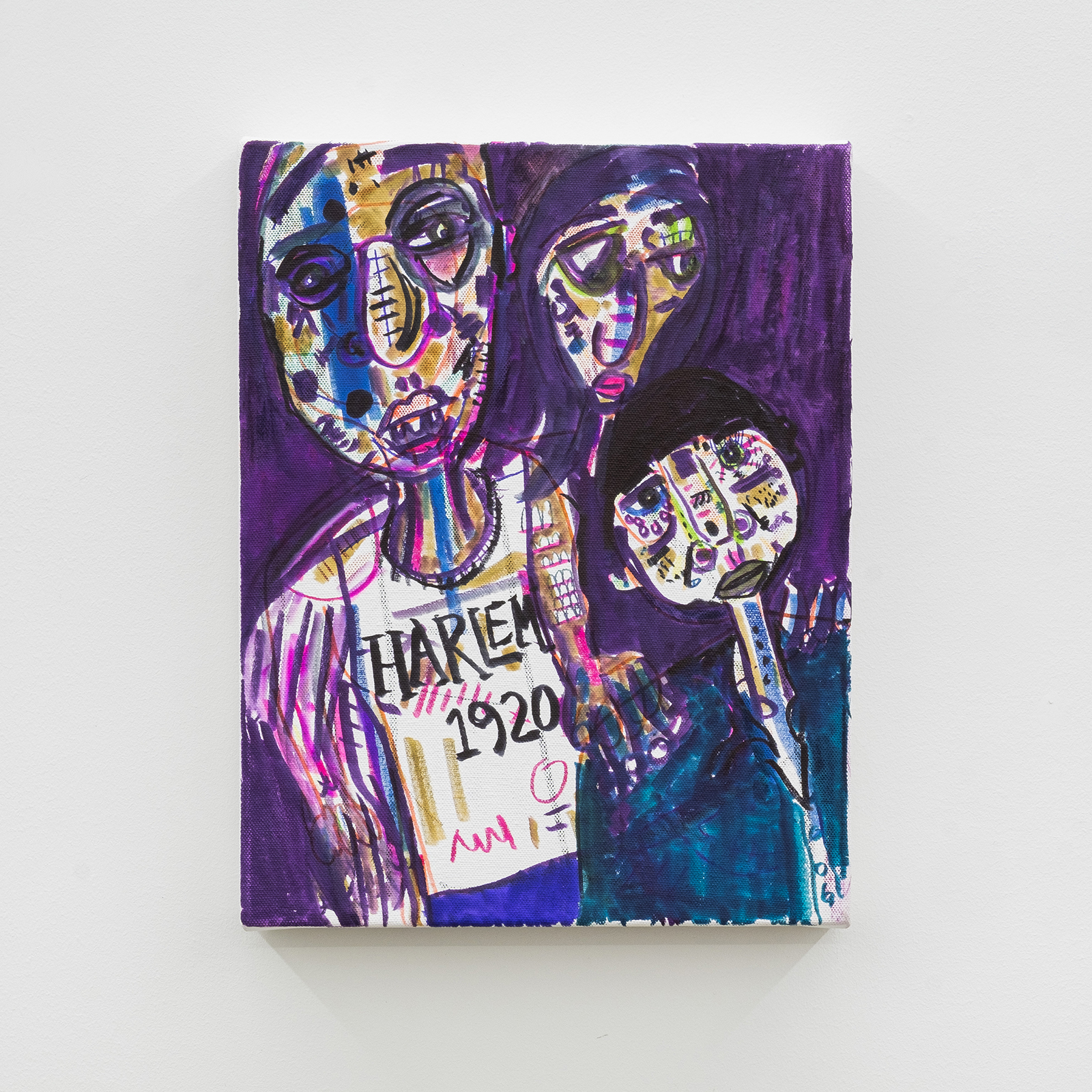 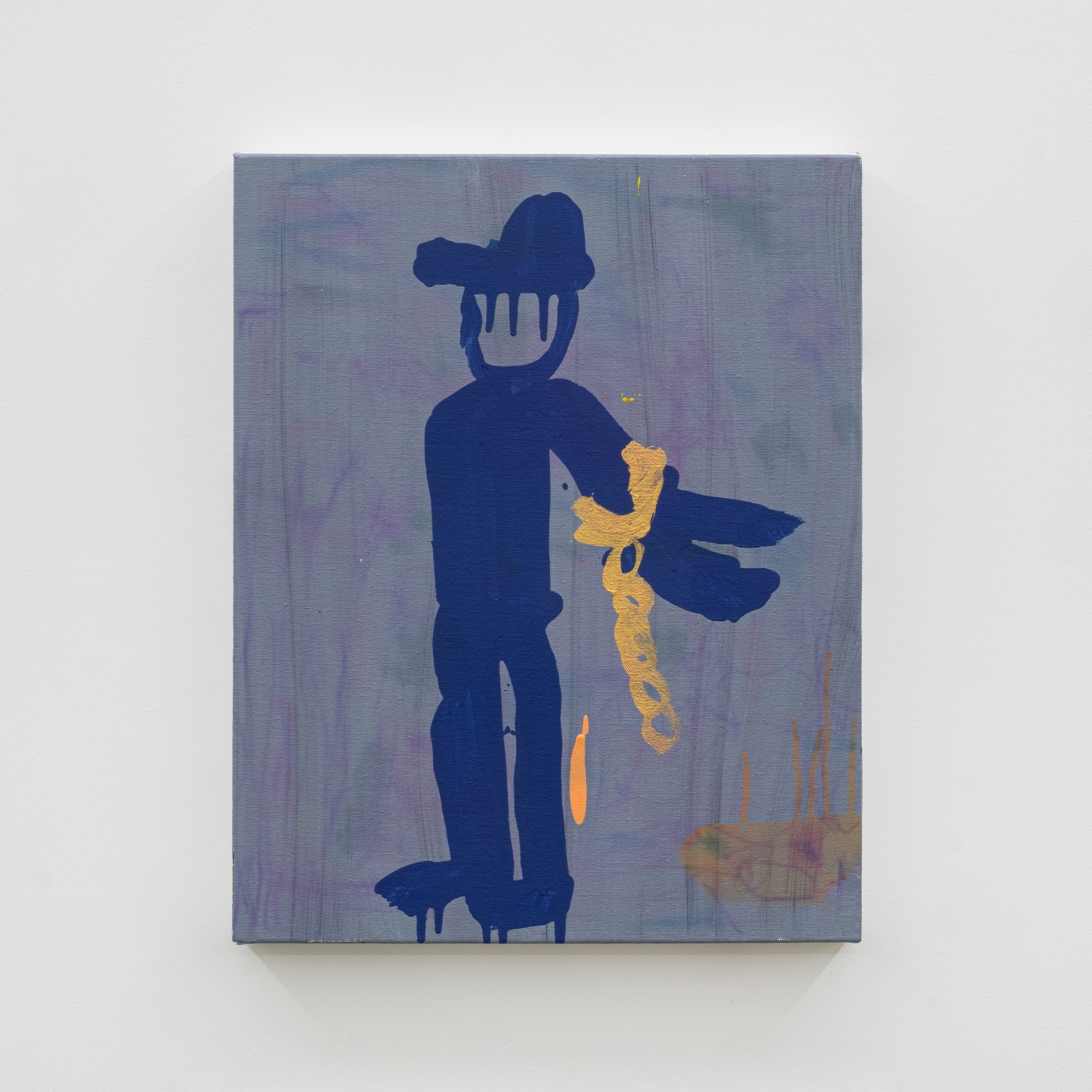 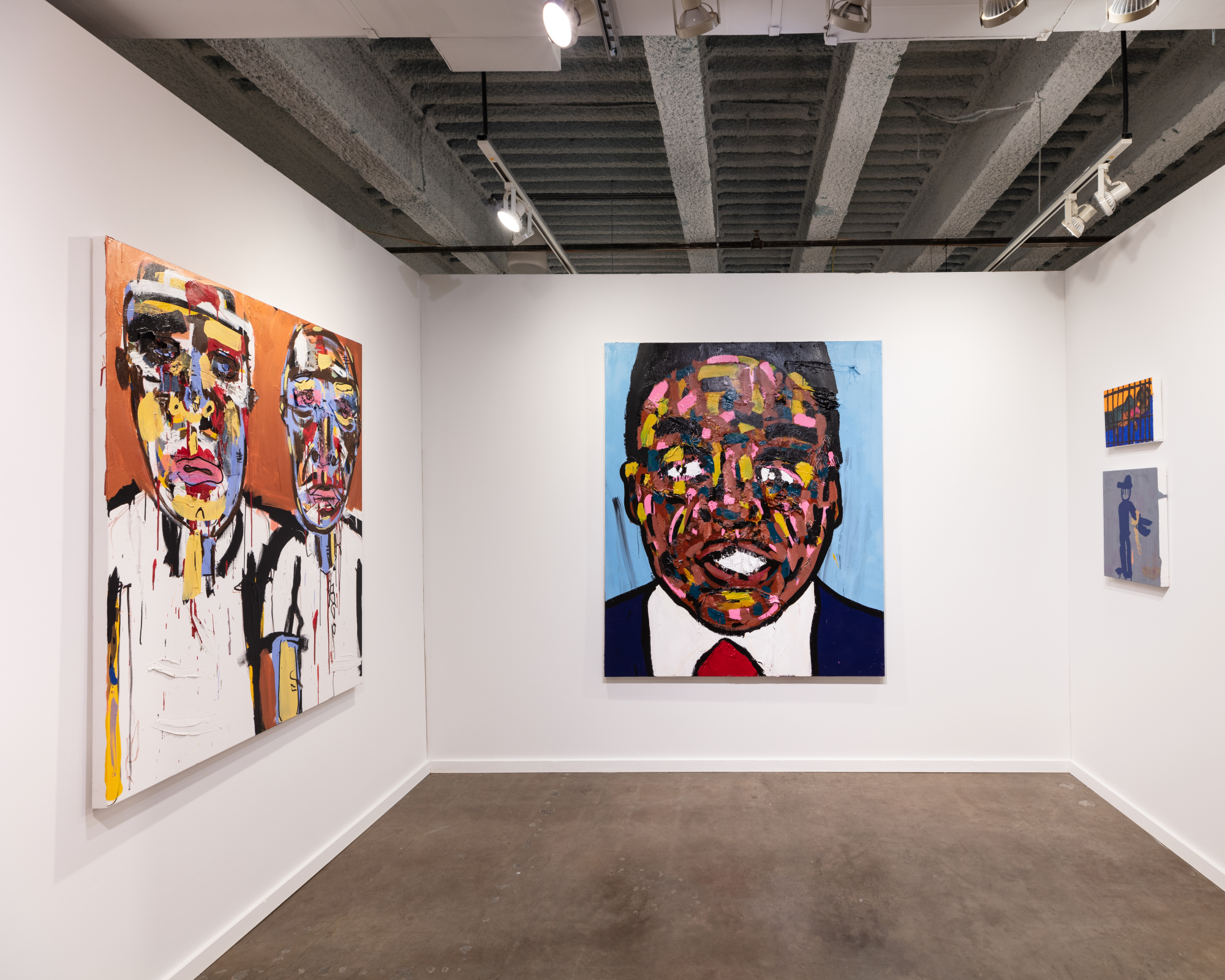 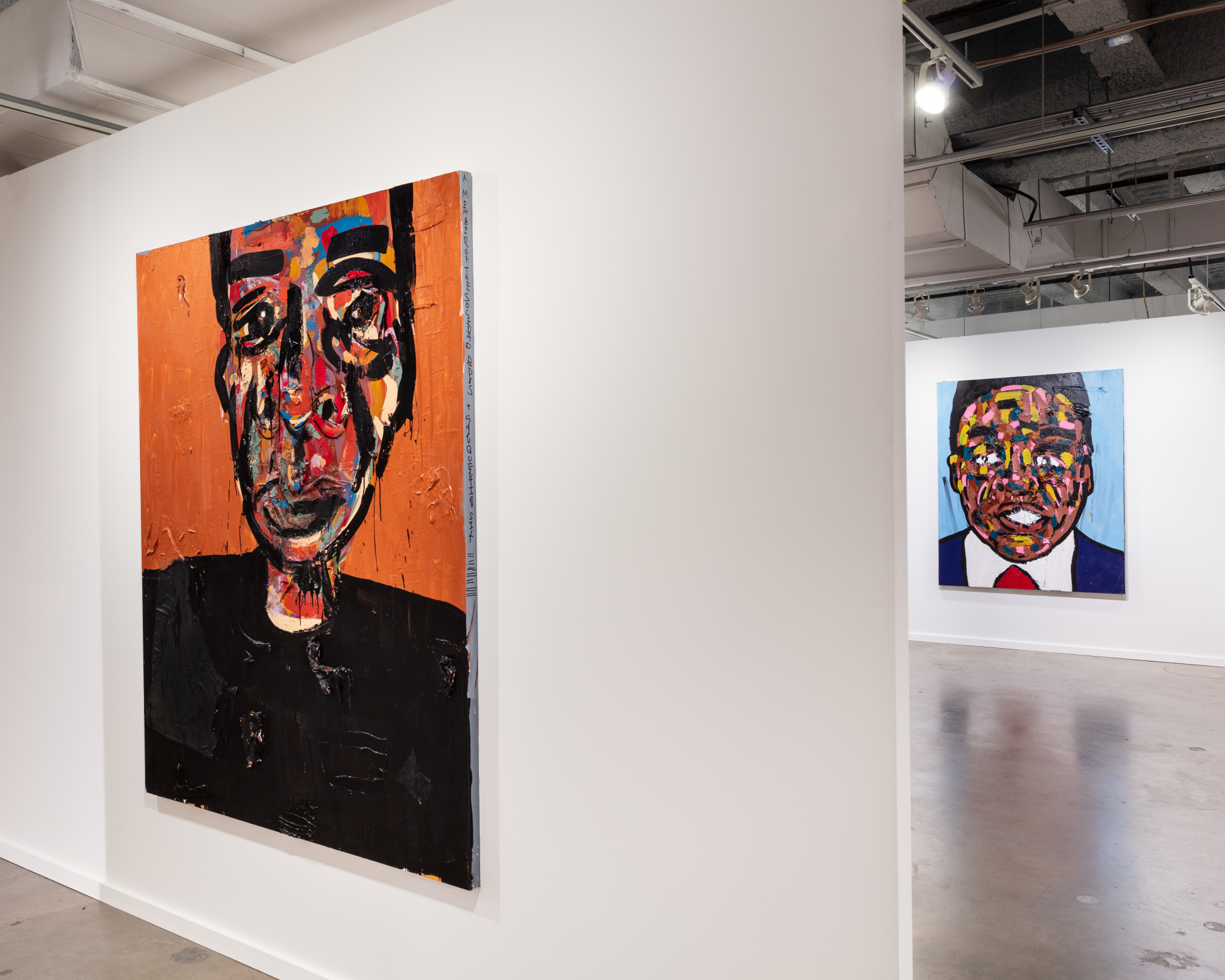 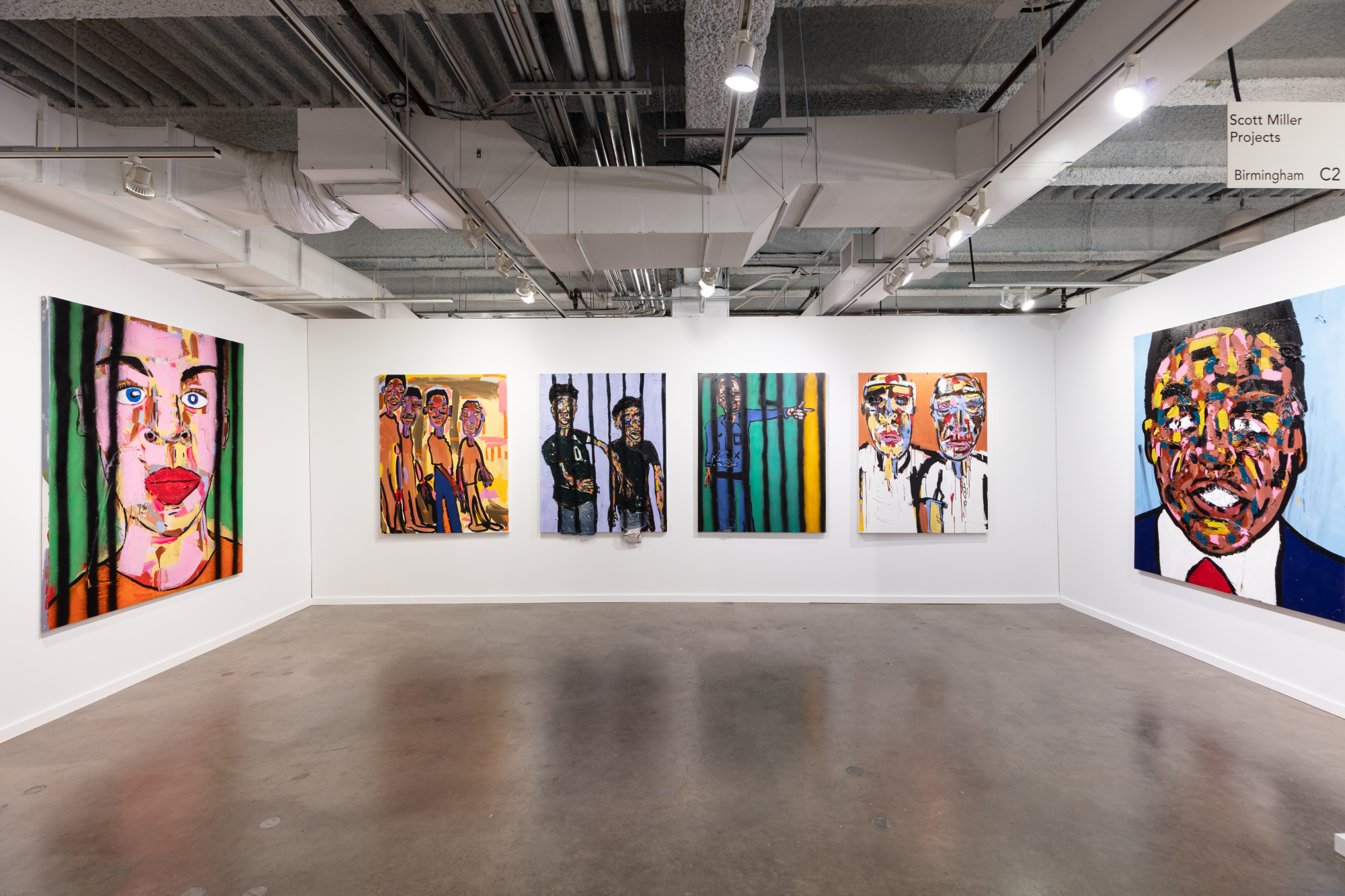 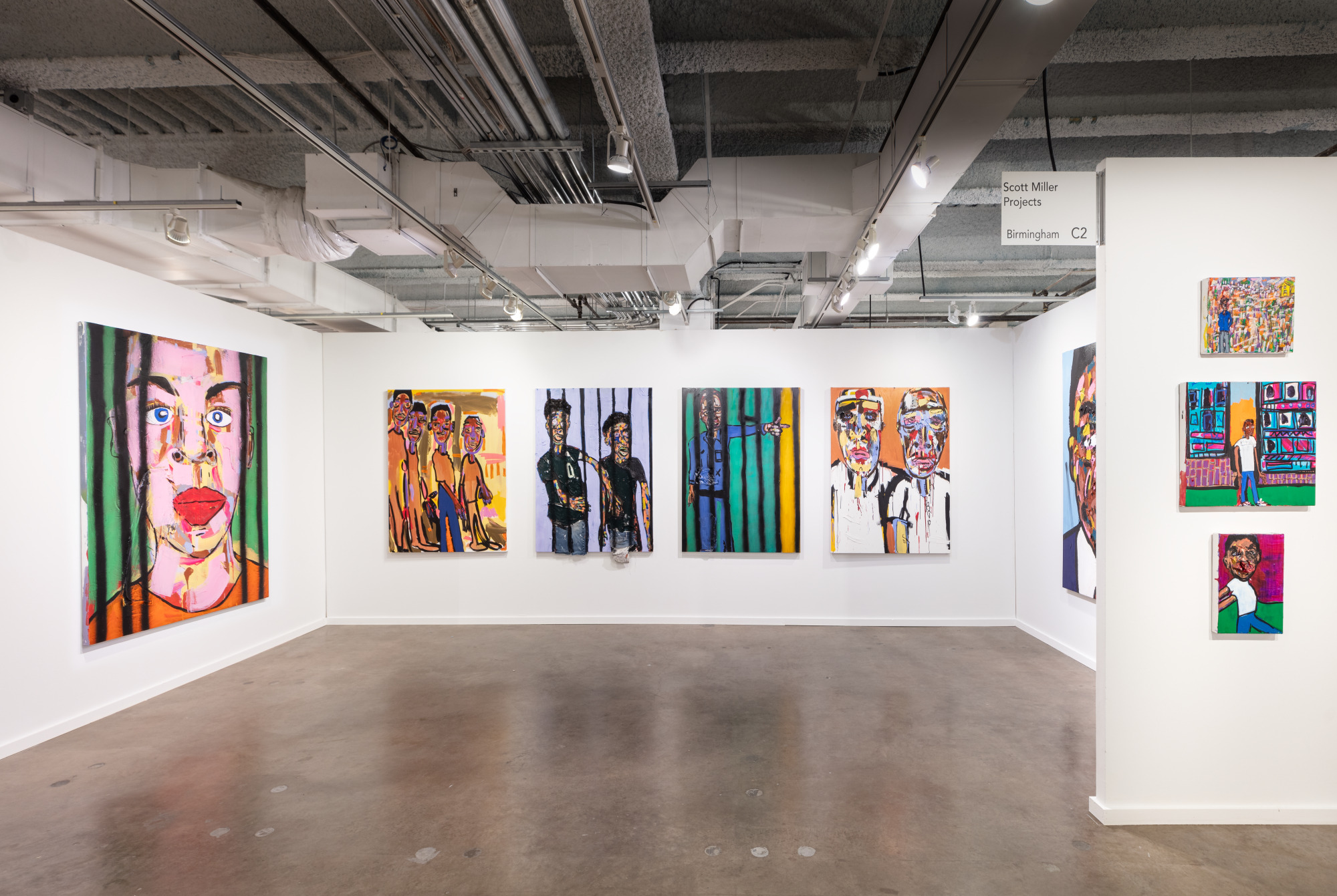 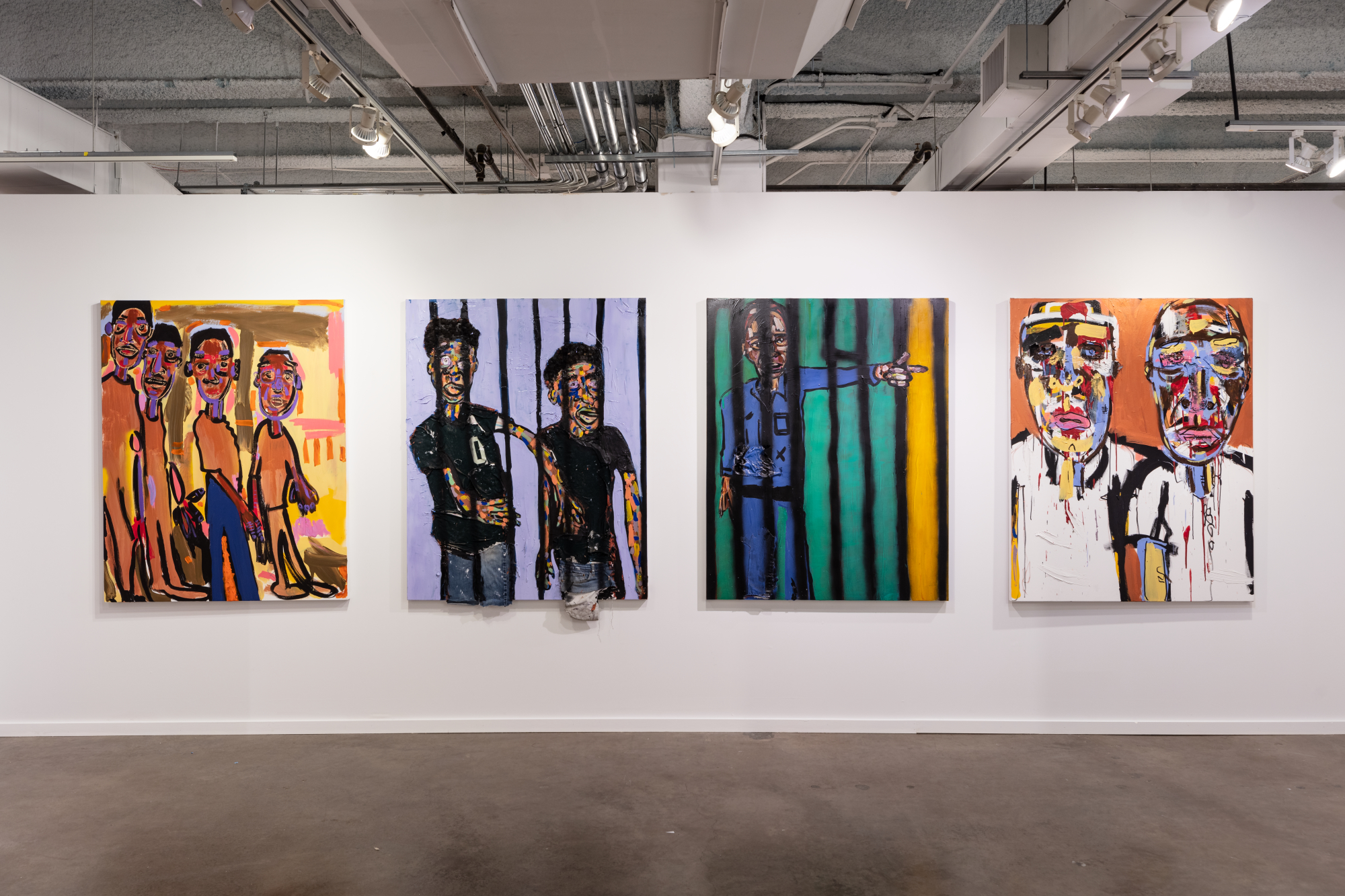 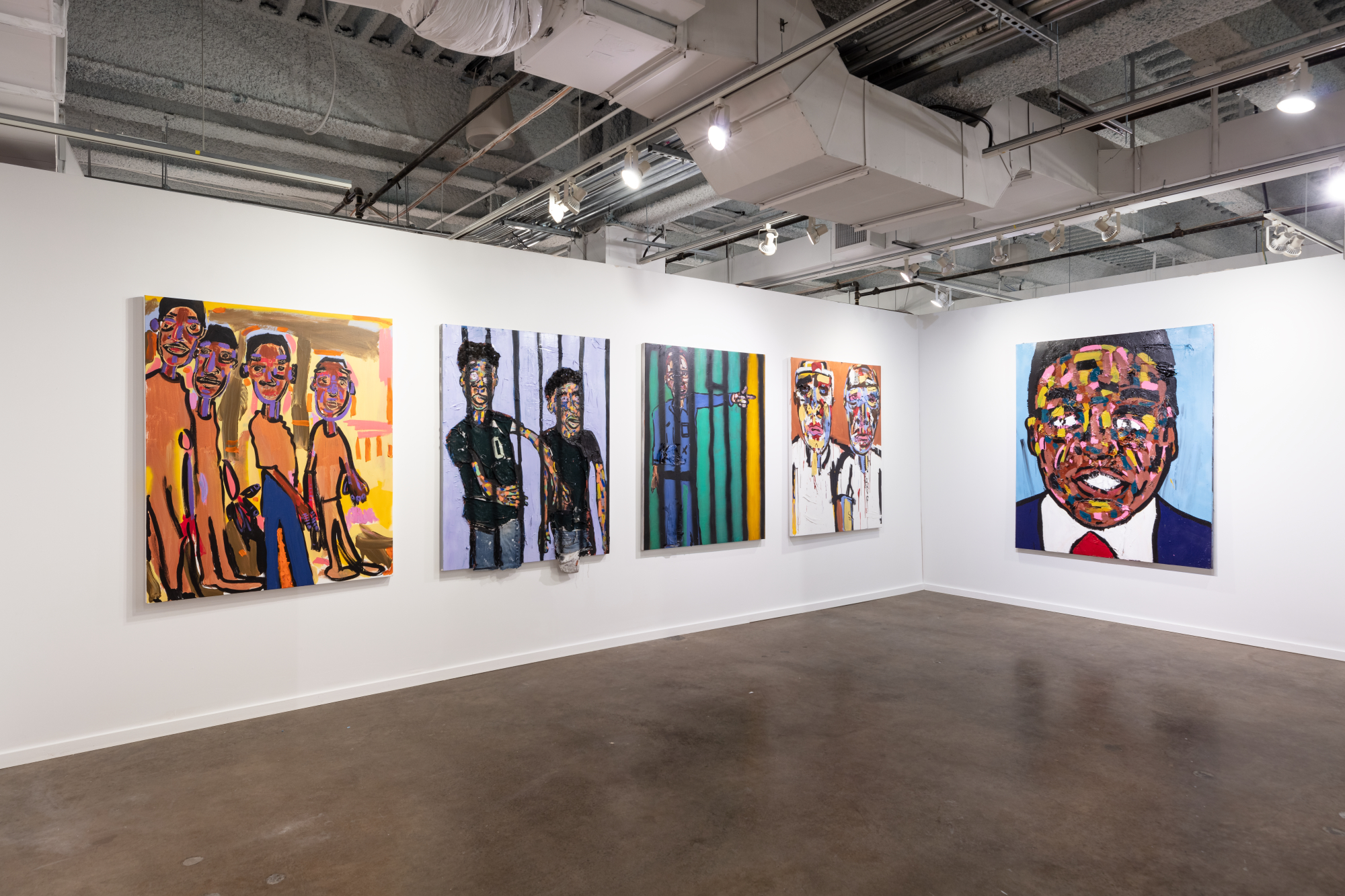 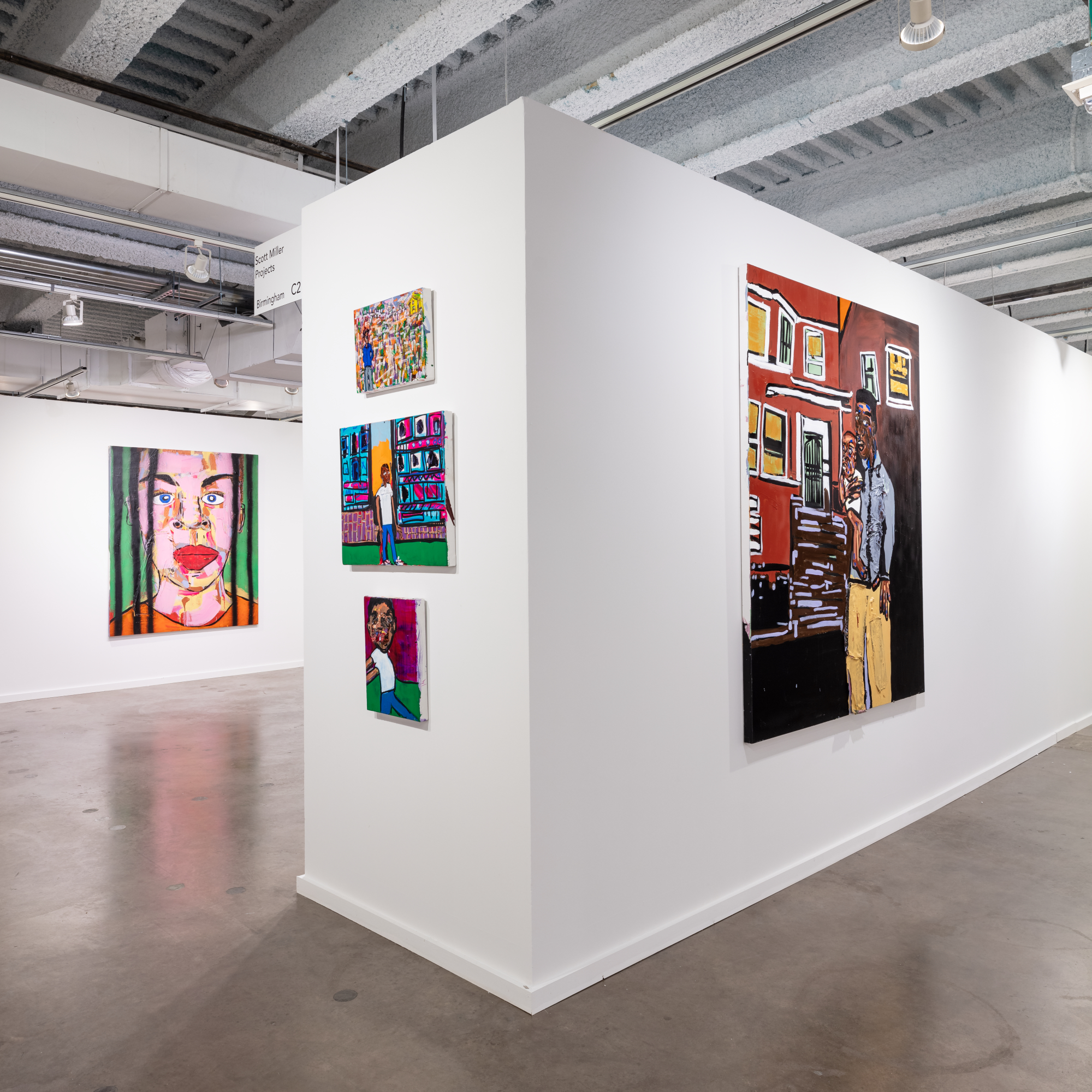 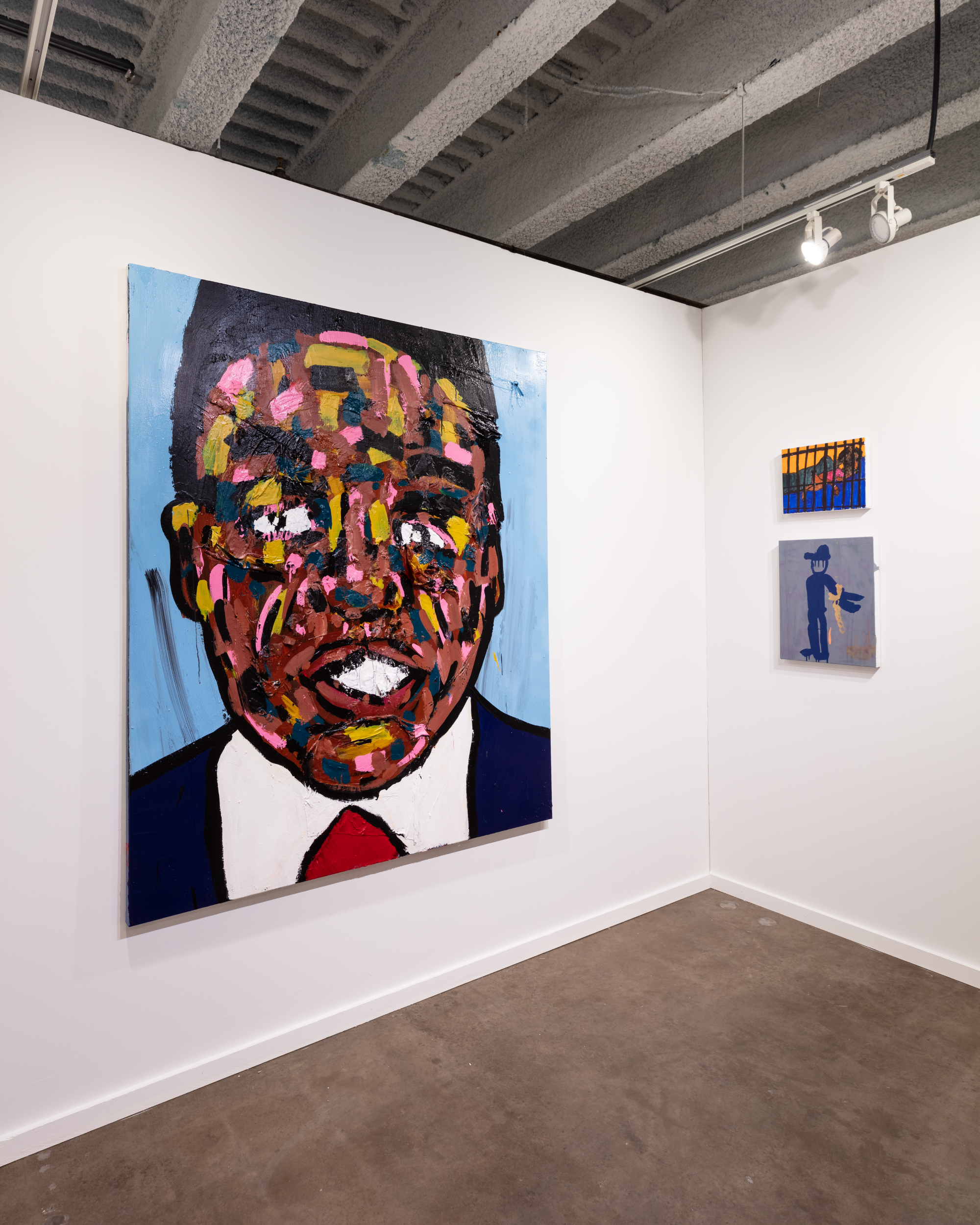