In An Imperial Message, Franz Kafka invites us to witness a simple — yet impossible — task. Take a missive from here to there. From king to subject. Yet, as he explains, “the crowd is so huge; its dwelling places are infinite . . . how futile are his efforts . . . never shall he win his way through. And if he did manage that, nothing would have been achieved.” What’s so striking about Kafka’s resignation is not that the messenger fails, but that the message is never received.

One of the greatest conundrums for every creative is the question of how to situate the allegorical on an accessible stage. How to take evocative, complex, problematic issues and transform their representation and reinterpretation into something — word, image, deed — that demands we pause, and participate. And Christina Nicodema lays out these potentialities in paint. Fine. Great. Cool. Alright. Good. Perfect. Opportunities for indifference, noncommittal and nonchalant throwaway responses each of us utters every day. Or what Christina describes as “vague nothingness.” Of course, not for naught does she evoke that sense of existential dread, that resignation, that acceptance that what is here now will, eventually, fade away.

But what’s so ingenious about Nicodema’s paintings is that hidden within her familiar are shared possibilities. And her impasto is as much about intimacy as it is energy. Subtly, she elaborates on questions at play. Metaphors for life, death, rebirth, fecundity, familiarity, failure, emerge across her canvases, works so vast we’re urged to immerse ourselves in the usually invisible, those tricks of the eye, the trompe-l’œil we’re invited to see. But she’s far more focused on object than abject. Maggots and grapefruits and melons and millipedes. Paint laid as if every stroke were a spore, as every breath the opportunity to inhale Bacillus, or Botrytis, or any other number of naturally emerging indicators of imminent decay.

Of course, that’s the inherent beauty — the mold in Fine so dynamic it looks like a dollop of marzipan; the figs in Alright waiting impatiently to devolve from love to liquid. Perhaps what’s so sophisticated about Nicodema’s work isn’t necessarily her passion for decay as metaphor. In many ways, that’s the true beauty of still life, the payoff for deeply intent and intense looking, that moment when the collapse of a fruit’s peel ceases to signify the fall of Rome and resonates as an indicator of the immediate. Because that’s what she wants, or at least what she hopes. Nicodema is at the threshold, waiting to sweep everything into the compost bin with every simultaneous “I told you so” flickering as life, or death, or rebirth, or the romantic past colliding with a terrifying future.

Self-reflection. Doubling. Simulacra. They’re all there on her canvases, beautiful stories of imminent demise. She loves the idea that painters and pillagers are equally as reliant on petroleum just as rot is as indicative of indifference as it is to oversupply.

But the great challenge with figurative, representational, allegorical painting is that it demands a great deal from the viewer. Attention. Analysis. Comprehension. Yet those aren’t necessarily even requirements. Though we might not admit it, her works have as much in common with Hollis Frampton’s decaying foil container of spaghetti (for Rosenquist, I suppose) as they do with every beautiful image. They’re like lessons in individual perspective, optimist-pessimist challenges where when you first glimpse Good you either focus on the ants, snails, bees, and strawberries – one’s been bitten into, for goodness’ sake! — or the rainbow polychrome molds that will eventually overtake everything on the picture plane.

As disturbingly, Nicodema’s works freeze us within these transitions, always already too bad to be good, yet, tantalizingly, offering the potential that something might still be okay. I say this, in part, because humans like to, I would say need to believe that hope springs eternal, that there’s that one true berry that hasn’t yet succumbed to mold, the one that’s healthier, or heartier, or more resilient, or just lucky. As Slavoj Zizek remarked, “Whosoever finds themself at this place is the addressee, since the addressee is not defined by their positive qualities, but by the very contingent fact of finding themself at this place.” With every glance at This Is Fine we arrive. And what a strange place to be. 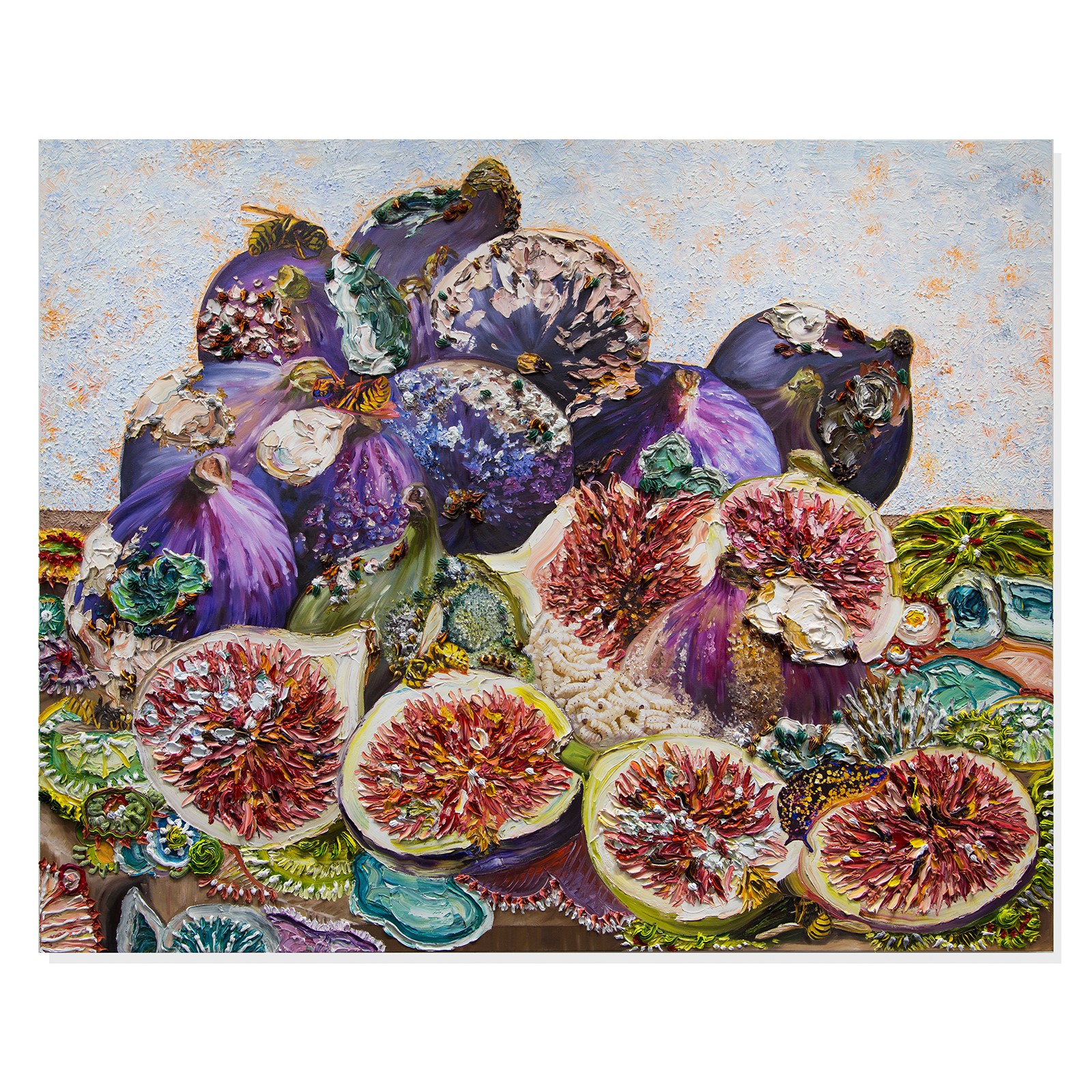 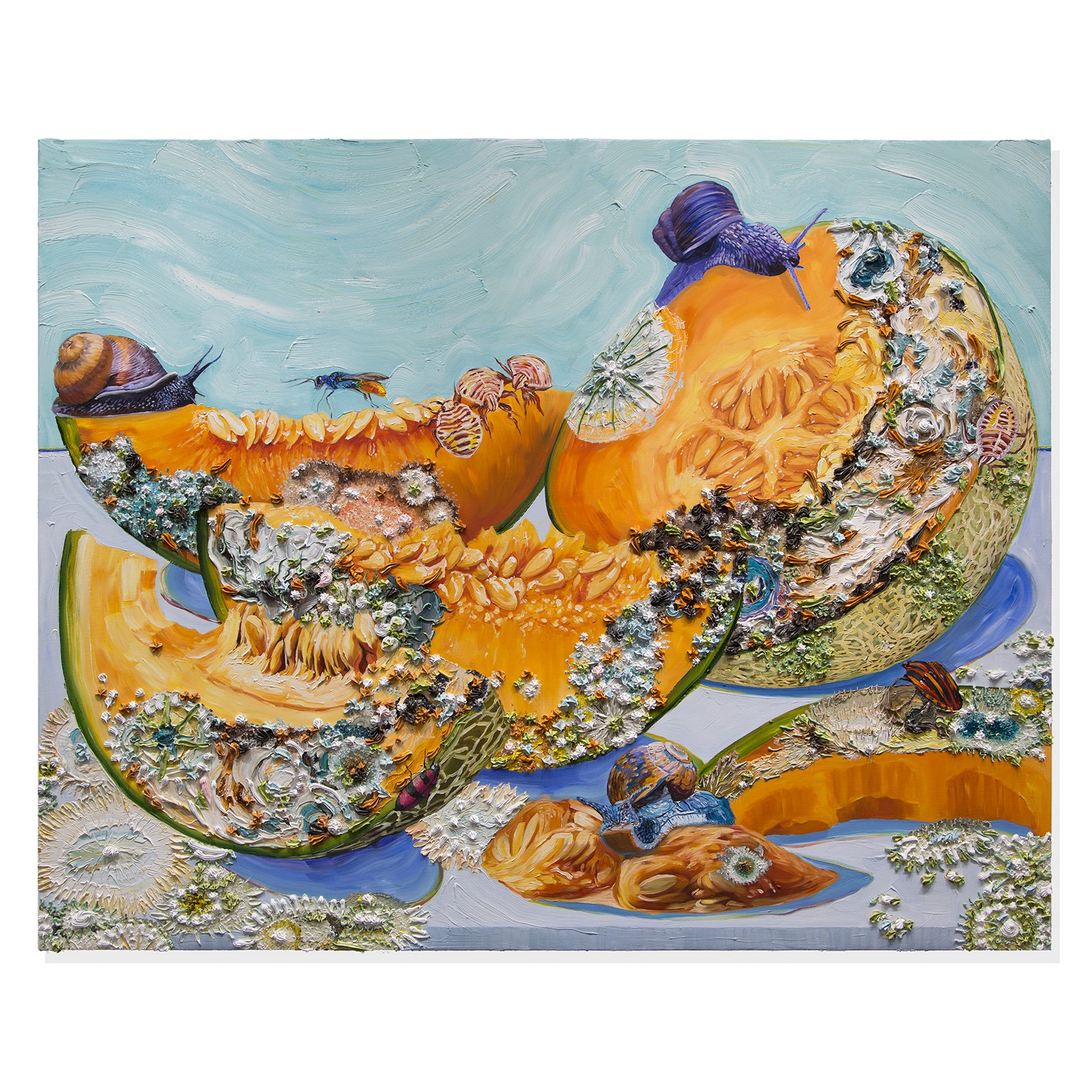 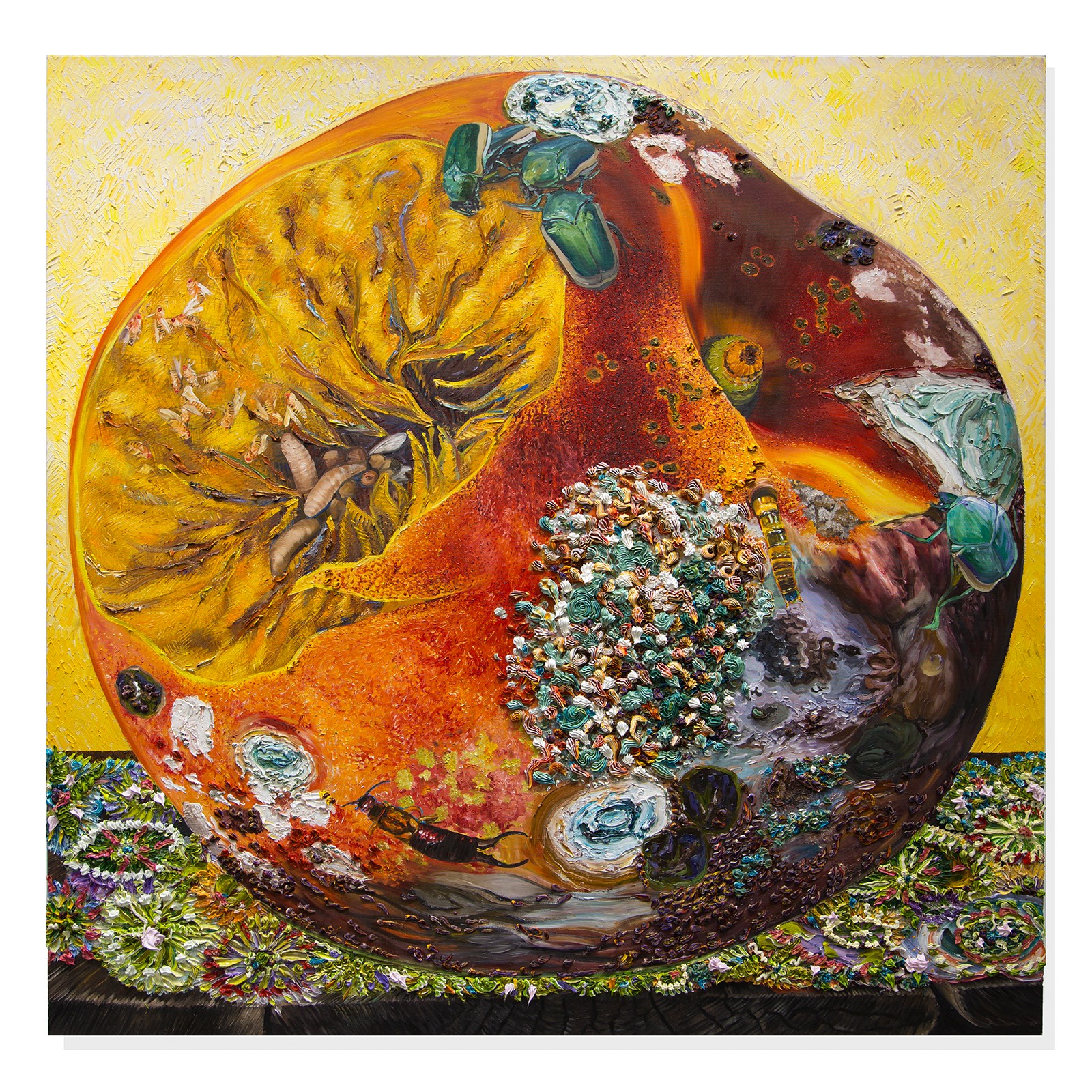 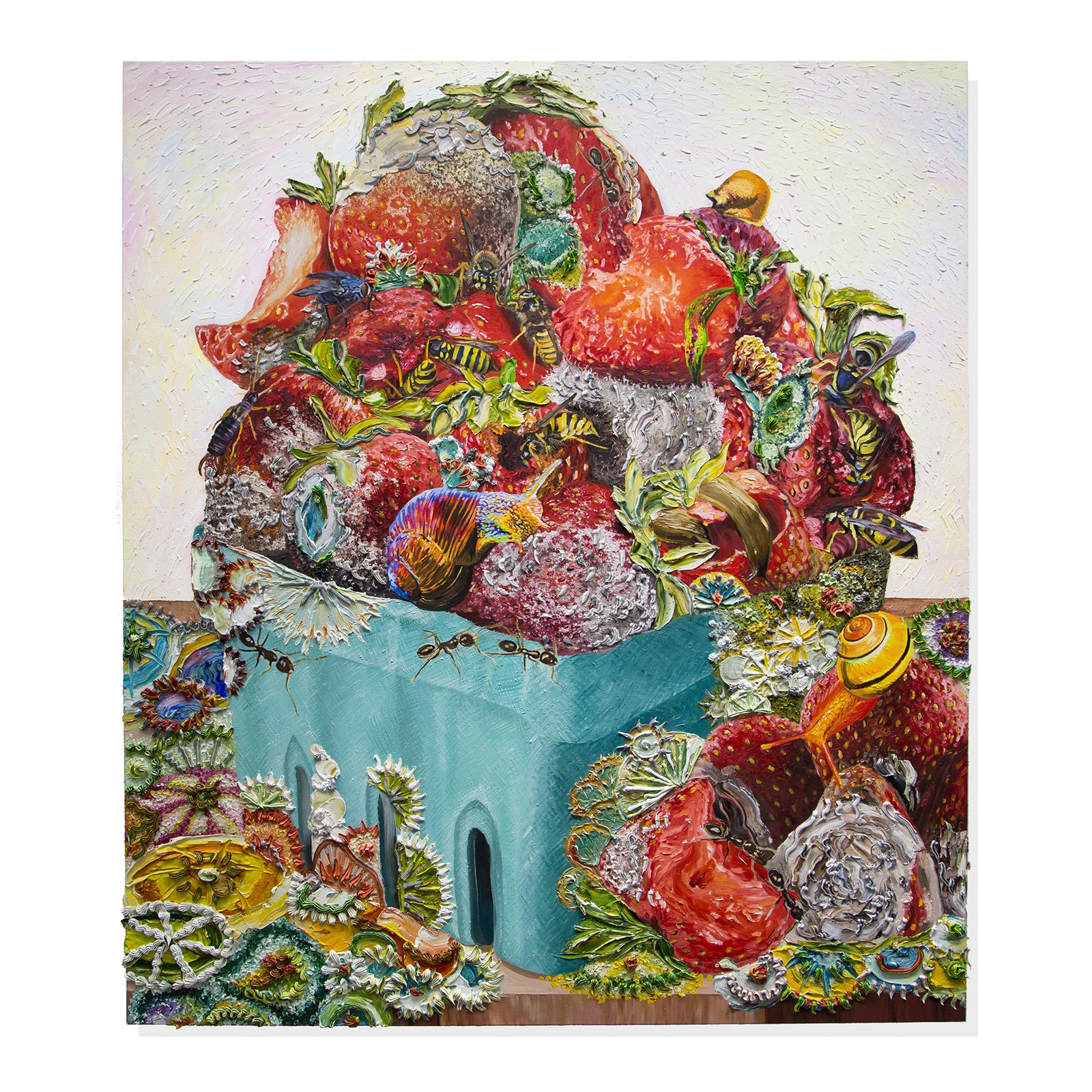 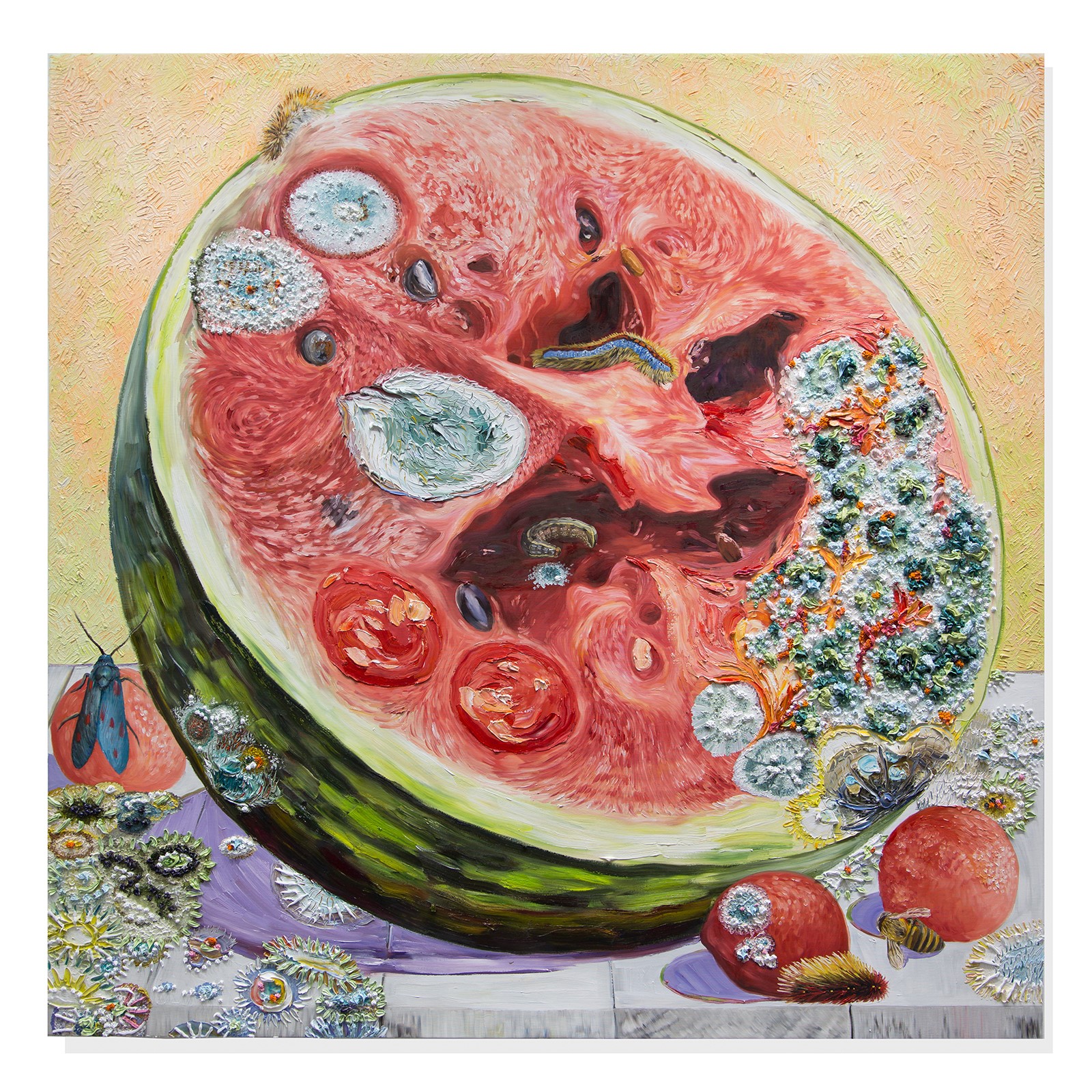 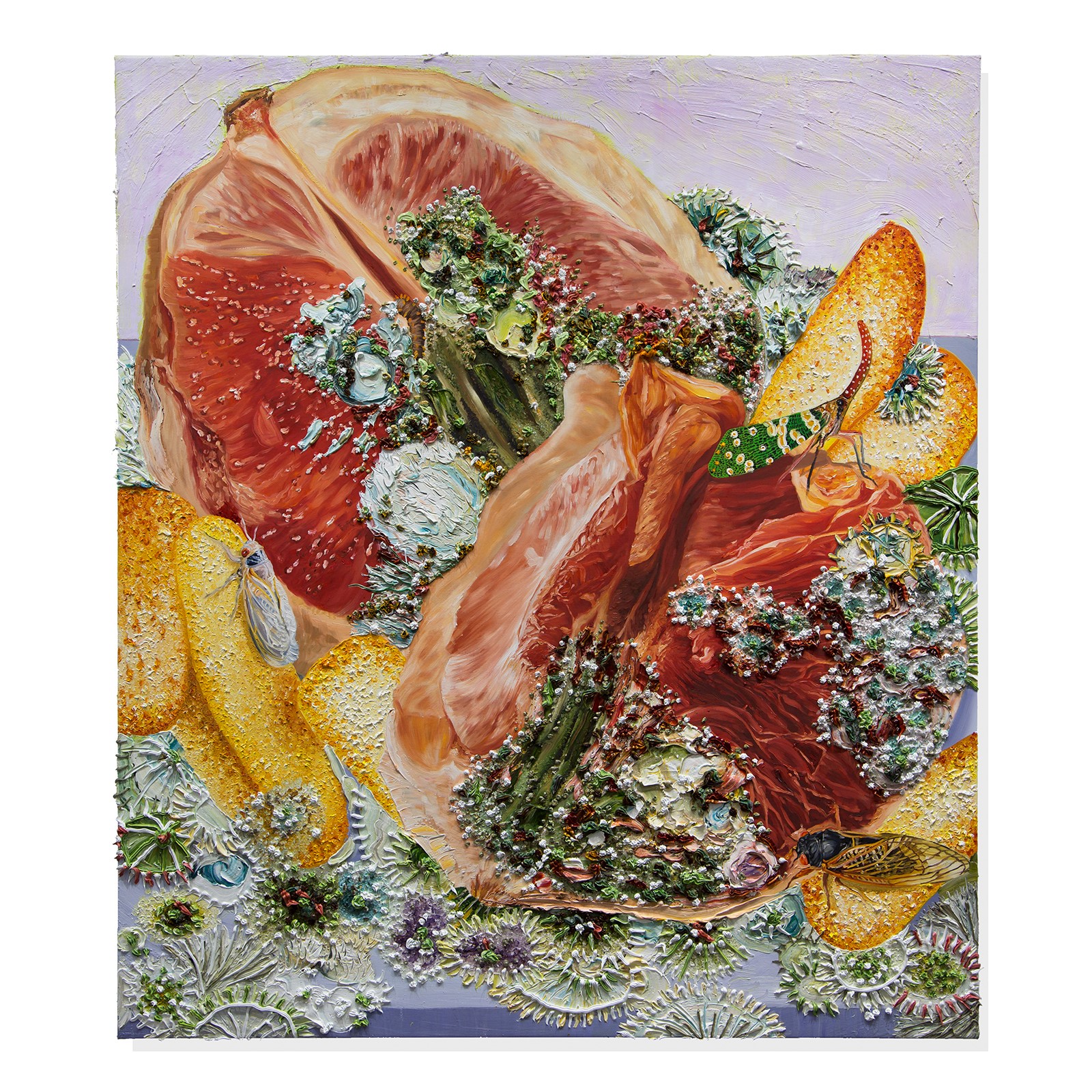 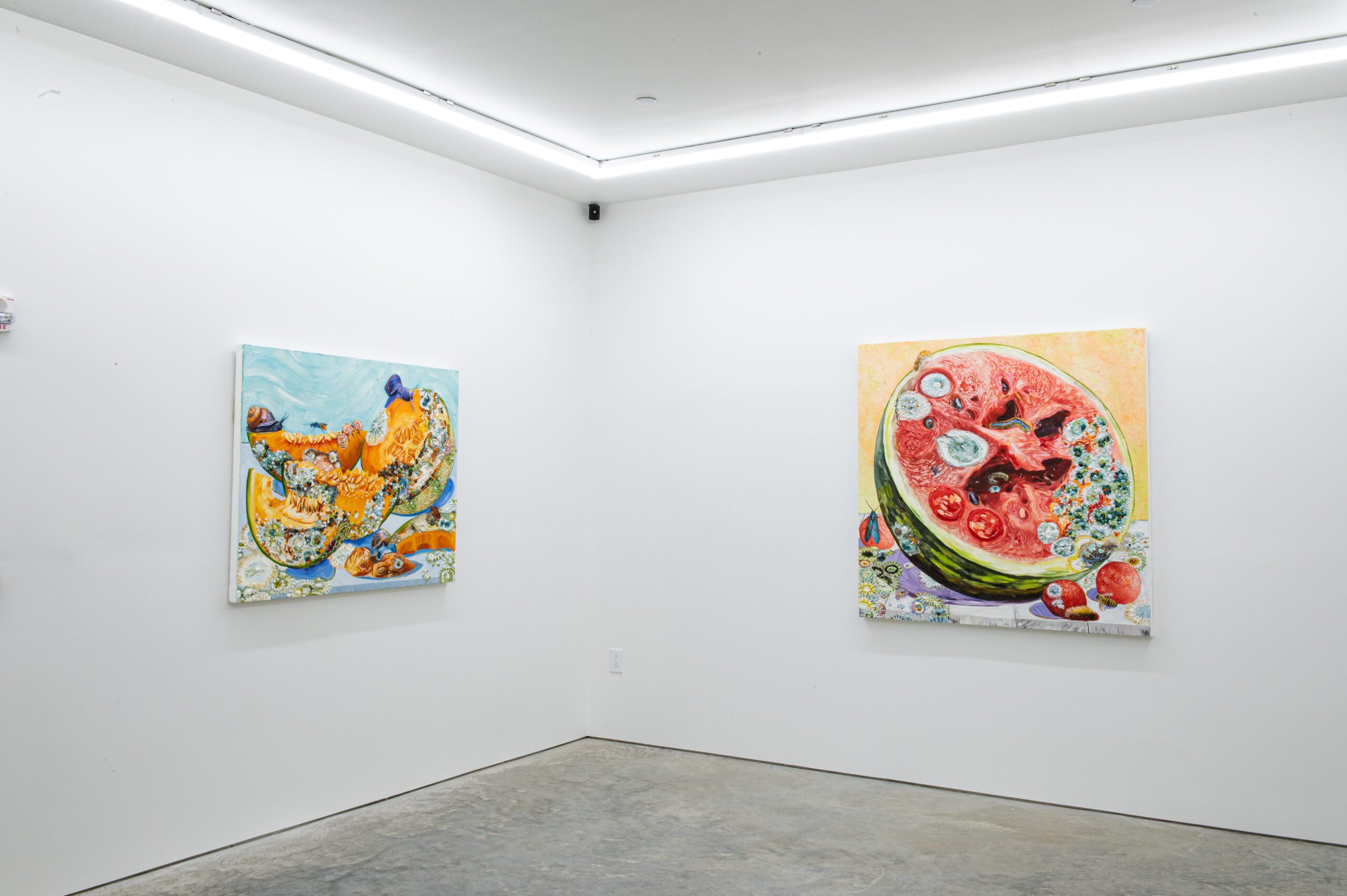 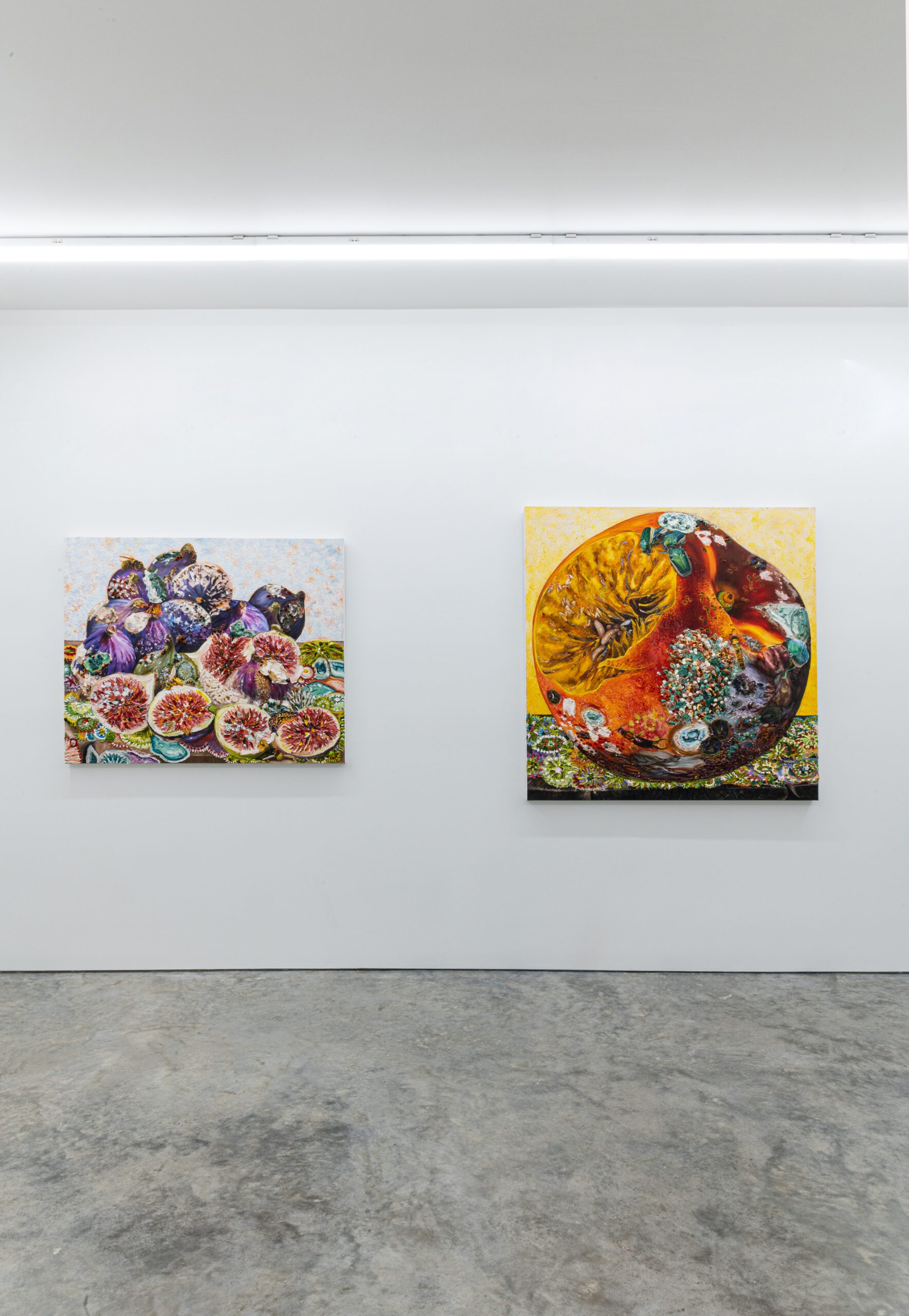 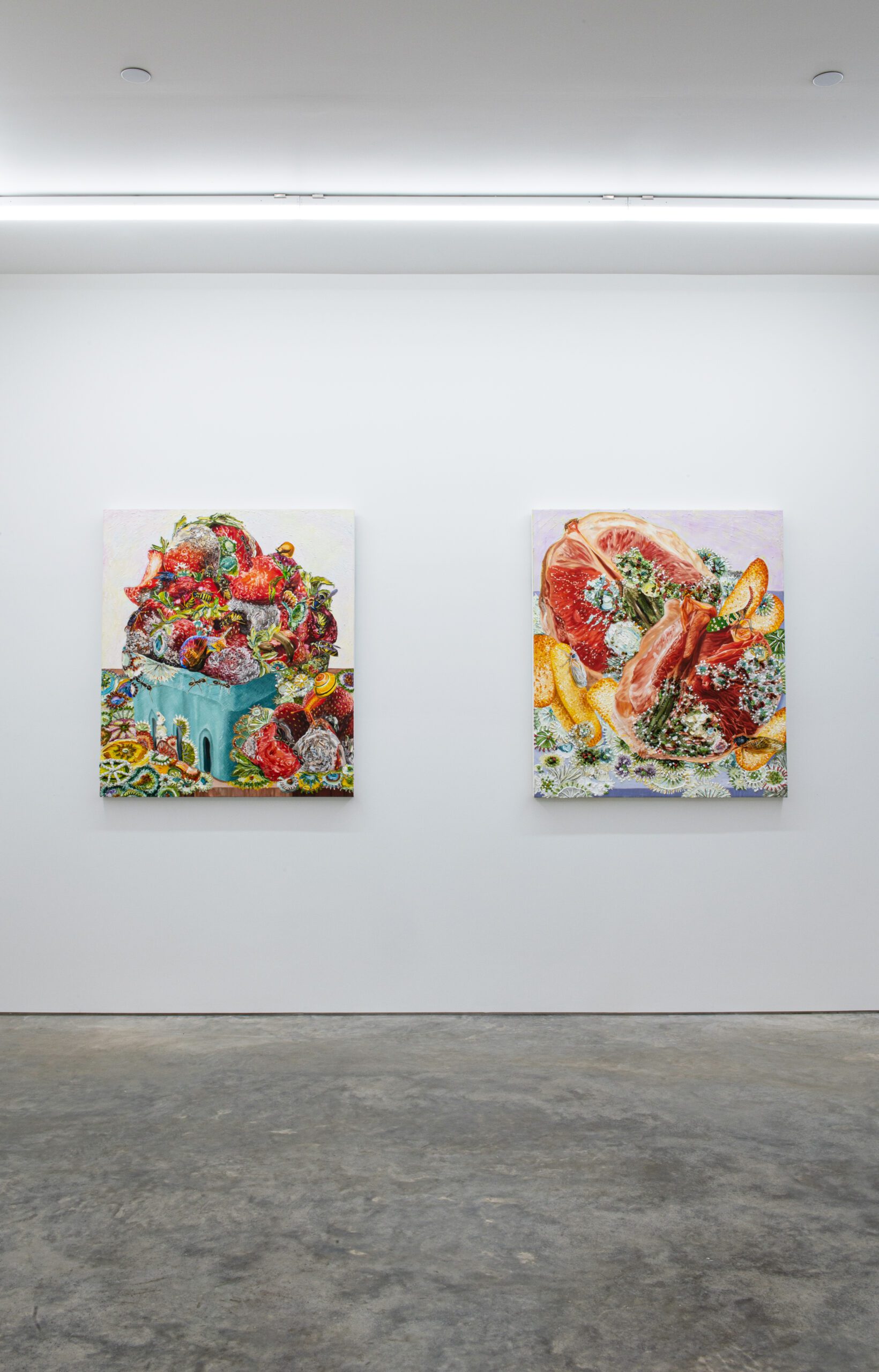 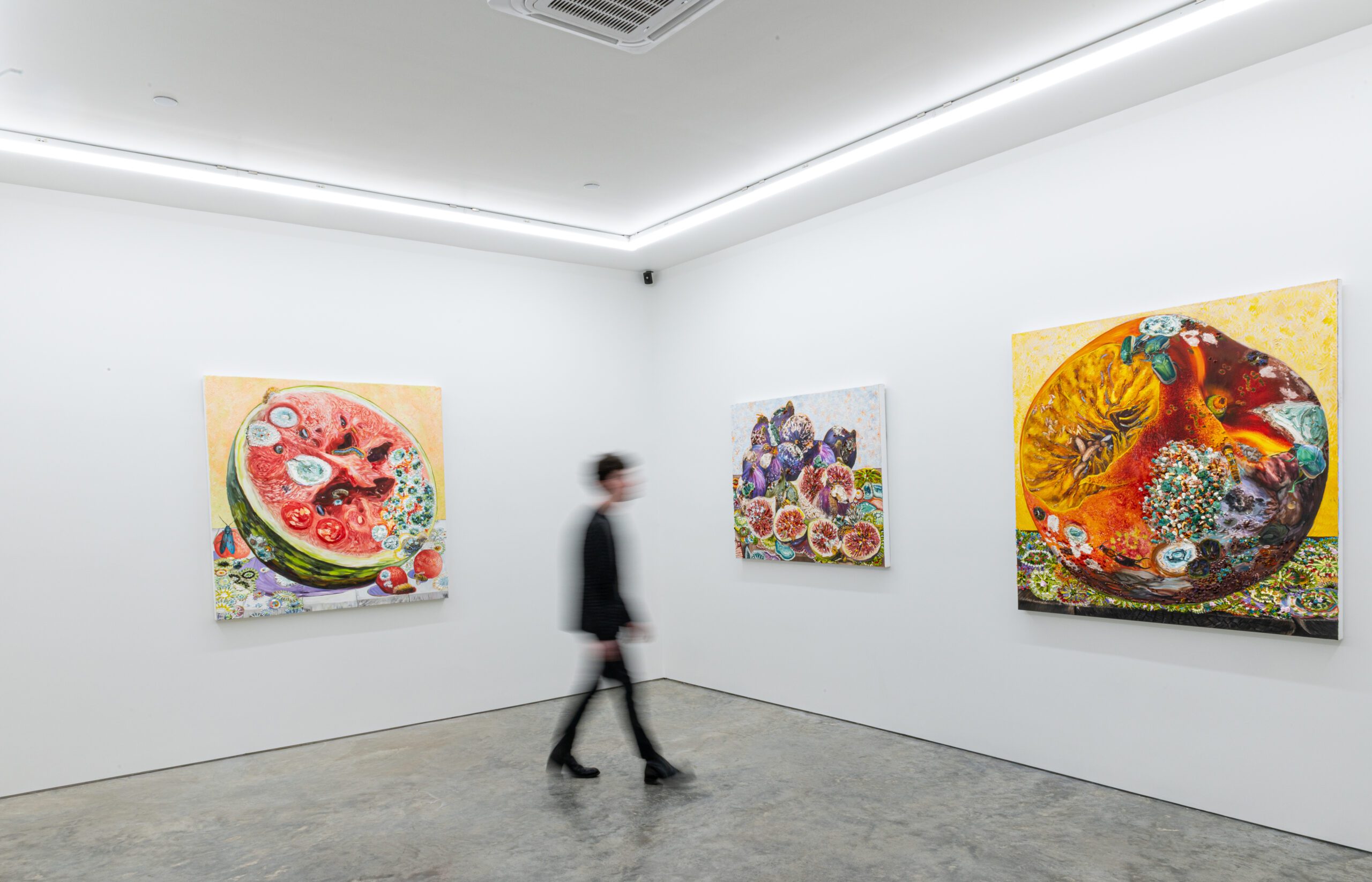 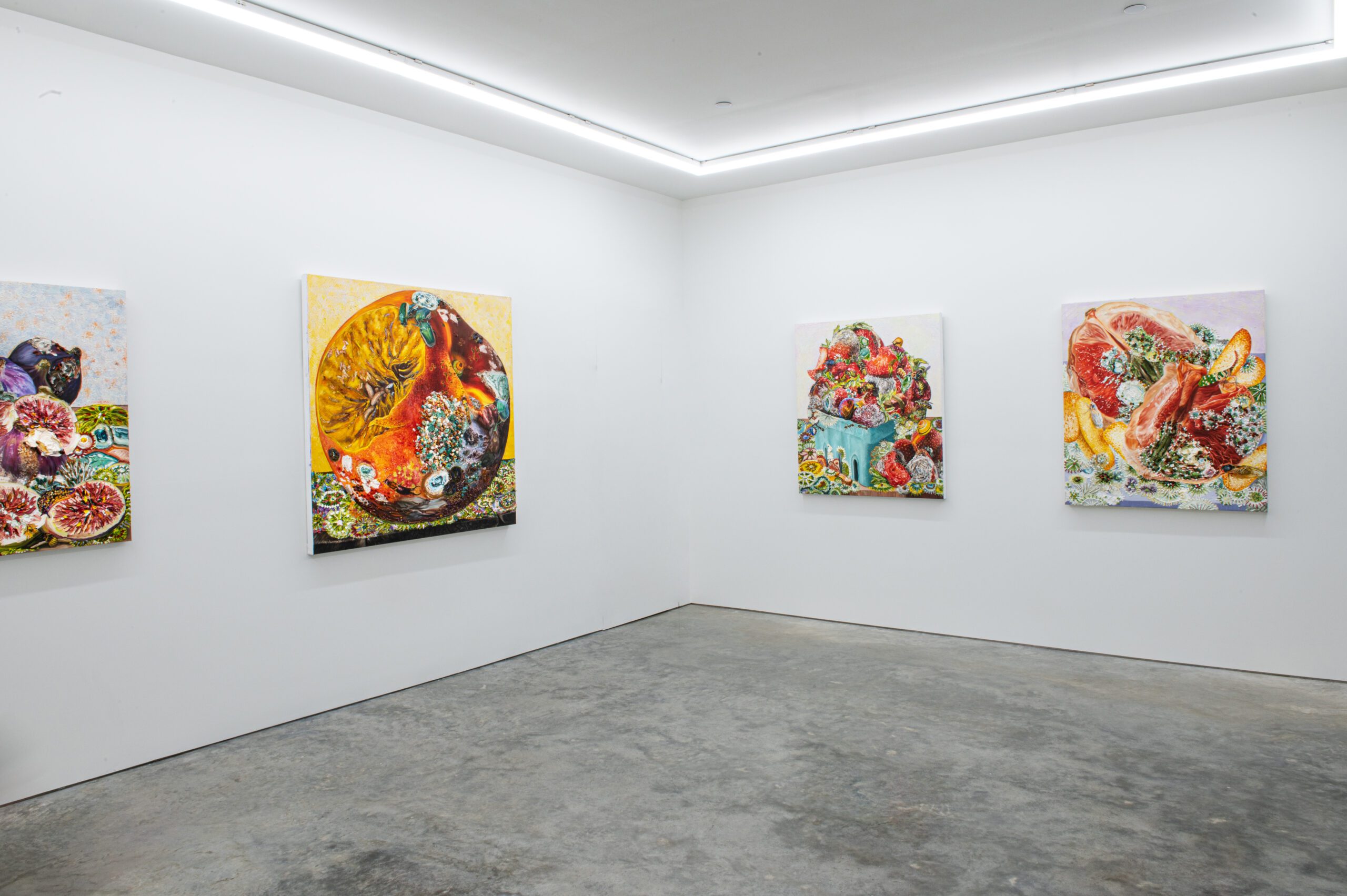 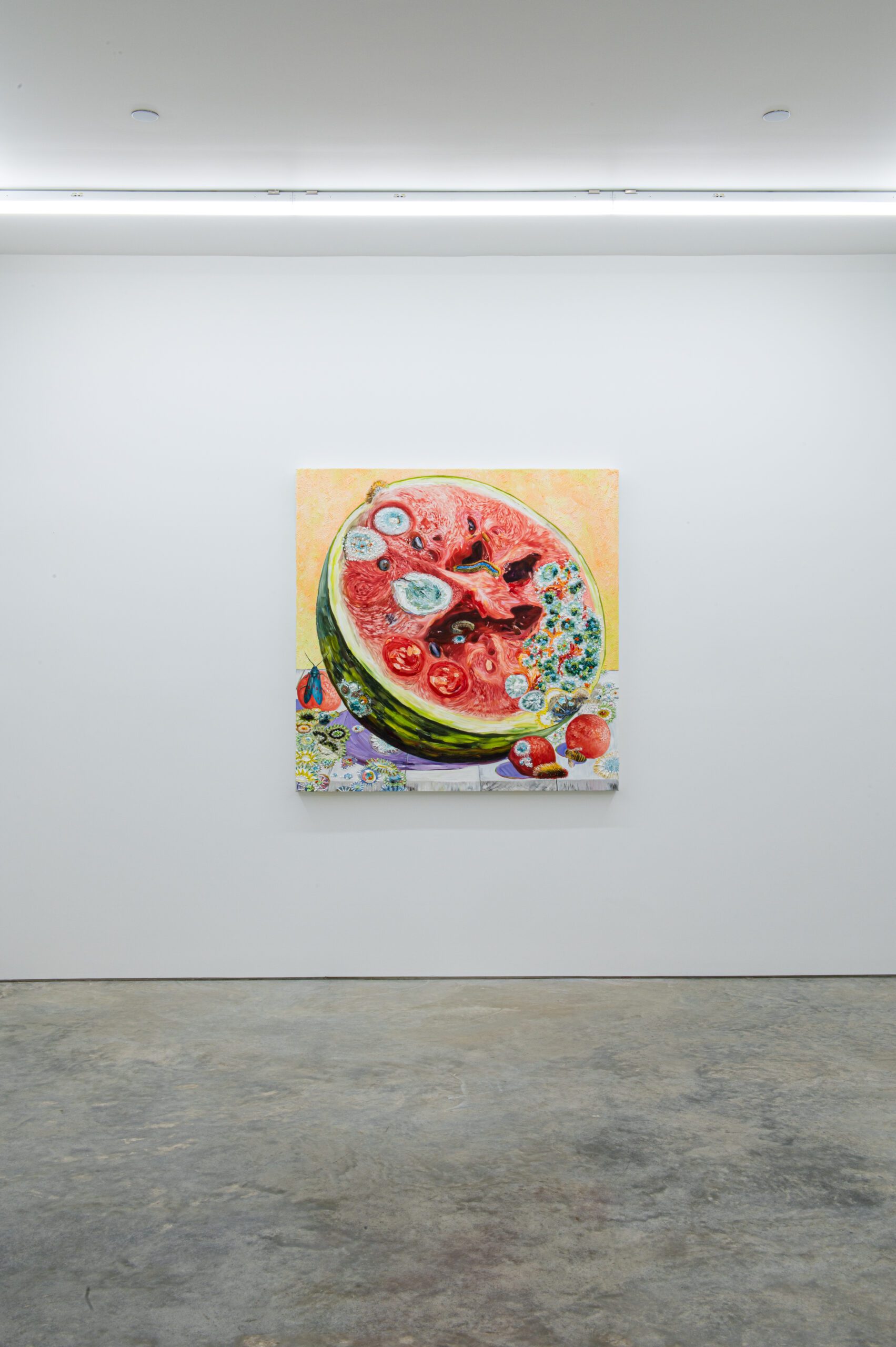 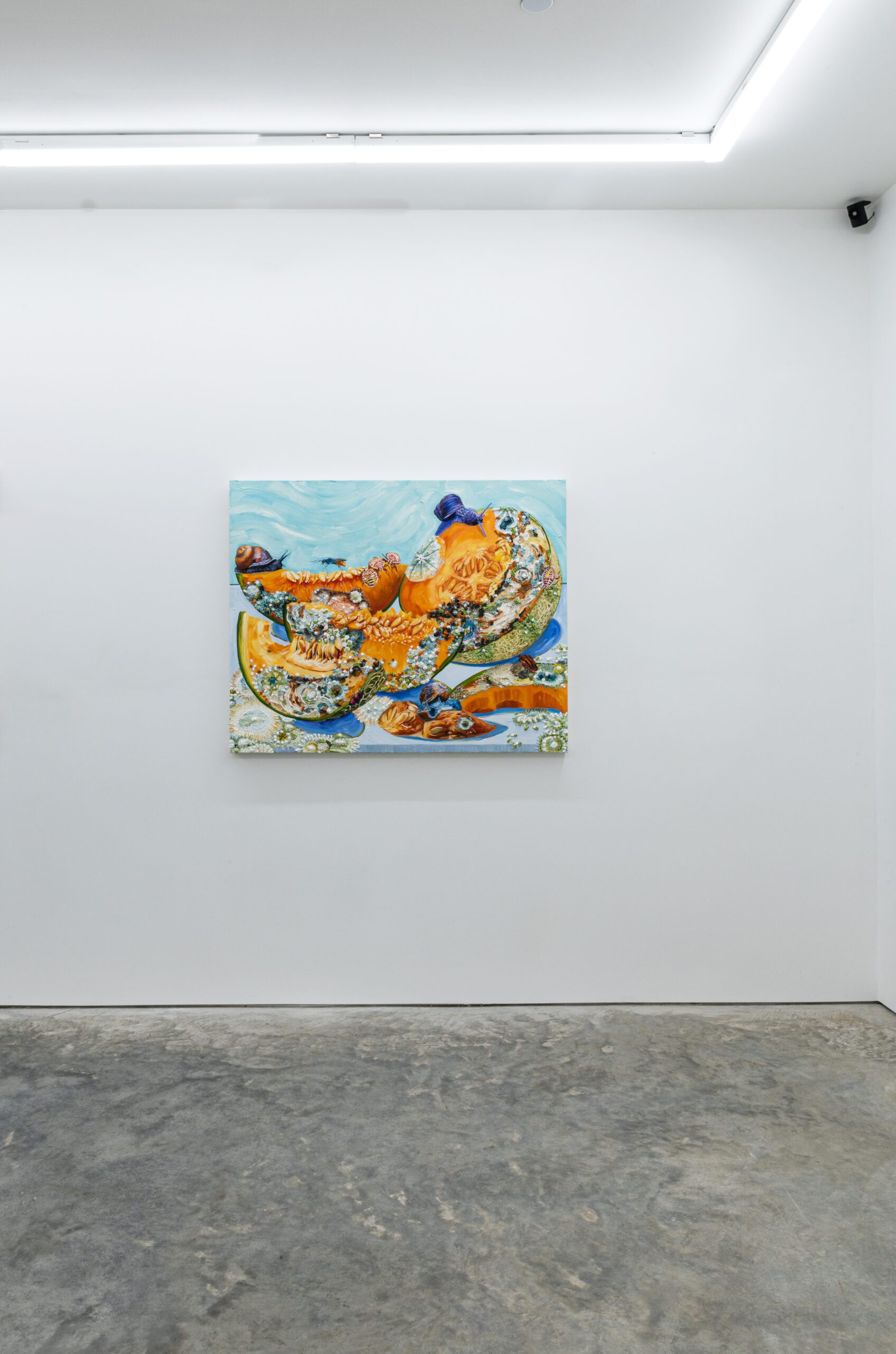 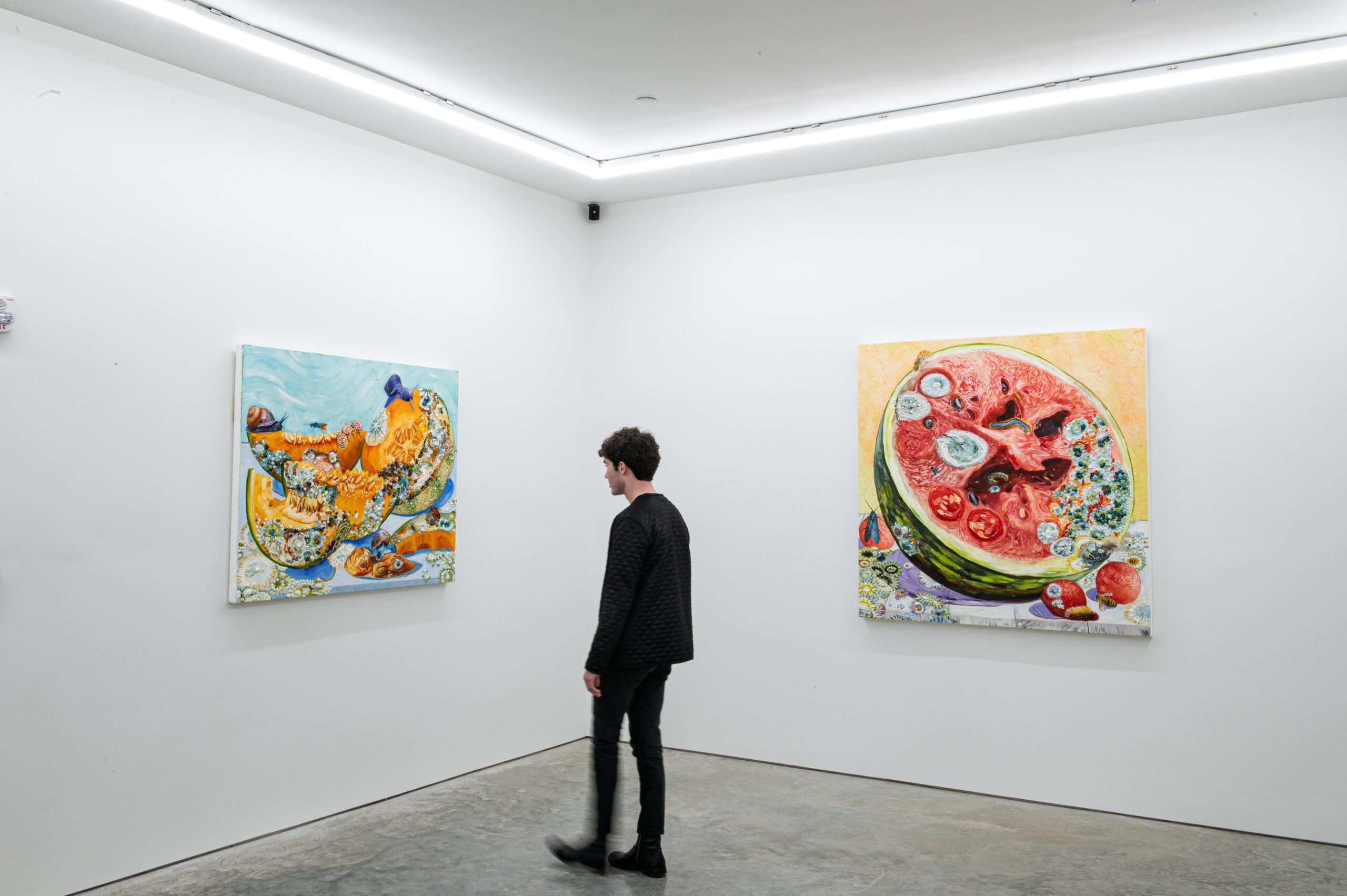